The second biggest Vaitheeswaran temple is in Chennai outskirts in the group of nine Navagrahas temples.  The 1200-year-old temple believed to have been built during the Kingdom of Raja raja Chola, for Lord Vaidyanathar in the name of Lord Uttara Vaithyanathar exists in a place called Poondamalli which is about 25 km from Chennai. The prime deity in this temple is called Lord Vaitheeswaran and his consort as Goddess Thaiyal Naayagi, both names similar as  in other Lord Vaitheeswaran temples. In all the Vaitheeswaran temples, wherever they are, the prime God i.e.  Lord Shiva is called Lord Vaitheeswaran and his consort Goddess Parvathi as Thaiyal nayagi. In the Uttara Vaitheeswaran temple Thaiyal Nayagi is also known as Balambika. Bala means beauty. The Goddess was initially known as Thaila Nayagi (Thaila nayagi meaning the one who carried the medicated oils for treatment) which over years came to be referred to as Thaiyal Nayagi. The clothes are stitched to bring them to shape and the person engaged in the process is called tailor in tamil. Since the Goddess has assisted the Lord to bring back the diseased Lord Angaraha into good form, she was referred to as the female tailor i.e thaiyal nayagi.

Several centuries ago the present Uttara Vaithyanathar temple dedicated to Lord Shiva was in the midst of thick jasmine forest and thus this place earned the name ‘Poo virintha malli’ in tamil meaning the place where jasmine flowers blossomed in plenty. Later the name shrunk to Poondamalli. This temple is also another version of Lord Vaitheeswaran temple near Sirkazhi, which is prime temple meant to get rid of adverse effects of Mars in one’s horoscope (called Angaraha or Chevvai in Tamil) and to get relief of various ailments troubling one.

There is an interesting lore as to why the ill effects of Mars (Lord Angaraha) in one’s horoscope will get nullified if they go and offer prayers to Lord Angaraha in any one of the Lord Vaitheeswaran temples.

Why worship of Lord Angaraha

in Lord Vaitheeswaran temples is mandatory

As per one of the folk lore, several thousands of years ago in Dwapara Yuga, many saints used to perform tapas at the hilly terrains of Mount Himalayas. One such divine saint was Kalamunivar (Kalamunivar meaning the one who can predict the time of destiny) who was gifted with the power of foretelling the past, present and future  events. Because Kalamunivar was divine saint, even the planets like Navagrahas were friendly to him. Once he sat in penance praying to Lord Shiva seeking highest order of wisdom than any other saints.  However, since the saint was destined to undergo punishment at the far end of his life for some of the heinous sins and karma, which was due then as Brahma punishment, somehow he never bothered to read his own future though he could predict the past, present and future events for others.

Even as Lord Shiva was pleased with his prayers of Kalamunivar, he did not appear before the saint  as he did not wish to undo the divine destiny and therefore avoided manifesting before him till the past sins of Kalamunivar were cleared.  In light of it, he appeared before Kalamunivar in disguise of a young sanyasi, and engaged him in discussion and in the midst of discussion suddenly reminded him of his future and disappeared. Only then the shocked Kalamunivar realized that he was to atone the past sins and karma. As and when ones’ punishment becomes due, the specific Navagrahas will move and sit in the adverse position in their horoscope to allow the process of punishment begin. Accordingly, Mars (Lord Angaraha) was to sit in adverse position in the horoscope of the divine saint to beget him the punishment.  Aware of such a situation, the saint immediately called all the planets and requested them to show mercy by influencing Lord Angaraha who was ‘Rogathipathi’ (master for the diseases), to condone the ill effects for the saint and instead sit in the position bestowing good effect. Lord Angaraha obliged to the request of the divine saint and ensured that the saint escaped the affliction of a rare skin disease accrued out of past heinous karma. When Lord Brahma came to know of it, he was furious that the destiny of the saint had been willfully changed by Lord Angaraha violating the divine norms, and therefore instead of Kalamunivar, Lord Angaraha had to undertake the punishment and thus Lord Angaraha instantly got afflicted with the dreaded skin disease.

Lord Angaraha realized his folly and pleaded mercy from Lord Brahma as he could no more perform his duty in that form and Lord Brahma too realized the importance of the act of Lord Angaraha in ones’ life. At the same time Lord Brahma cannot take back the curse once given by him and therefore, he suggested him to go to Lord Dhanvanthri seeking his intervention to resolve the issue.

Time passed and Lord Shiva, pleased with the arduous tapas of Lord Angaraha appeared before him along with his consort Goddess Parvathi who was carrying medicated oils in pots. Both of them appeared in human form as physician and his assistant, and cured the rare skin disease of Lord Angaraha who was also in human form. With it when the curse got reversed, Lord Angaraha gained his original form. Lord Angaraha though initially did not recognize the physicians, just realized in the next few moments that the physicians were none other than Lord Shiva and Goddess Parvathi in disguise and instantly prostrated before them profusely thanking for their gesture and sought a boon from Lord Shiva.

Since he had been relieved of the disease in that place, he sought a boon  they should manifest there in a temple to be built by him in the name of Lord Vaithyanathar and Goddess Thaila nayagi (meaning physician and the one who carried medicated oil in pots). Lord Angaraha further requested that Lord Shiva should also allow him (Lord Angaraha) to take a seat in the temples wherever Lord Shiva will manifest as Lord Vaithyanathar and Goddess Parvathi as Thilanayagi so that  those afflicted with Angaraha Dosha, if  offer worship to him (Lord Angaraha) in those temples, the ill effects and severity of their Angaraha dosha (suffering evils due to sins) would be greatly nullified, leaving only negligible effect which is unavoidable as no pre-decided divine norms should be fully erased or nullified but can only be diluted.  Lord Shiva granted   the boon as desired by Lord Angaraha and this is the reason why in the temples where Lord Shiva manifest as Lord Vaithyanathar with his consort Goddess Parvathi as Thaiyal Nayagi, it has been made mandatory to worship Lord Angaraha too failing which the true benefits of prayers of the devotees will not fully realized.

One of the places where Lord Angaraha did tapas was the present temple site at Poondamalli which was heavily surrounded by Jasmine flowers then. When Lord Angaraha reached the spot he found a Shiv ling there. He was elated and offered prayers to Lord Shiva seeking his blessings to get his disease cured. There is a palm tree in the temple below which some foot print is seen and it is believed to be that of Lord Angaraha.

The greatness of this temple is that it has been reportedly established in Dwapara Yuga by Lord Angaraha and survived in all the four Yugas including Pralaya Yuga (the deluge) in which the entire creations of Lord Brahma gets destroyed. Again during Pralaya kala (deluge) there erupted a dreaded fever which could not be controlled by any one. When Lord Vaitheeswaran was prayed, he manifested here as Jureeswarar with three faces and eliminated the fever before the world got destroyed by deluge. There is a separate sanctum for Jureeswarar and he can be prayed there to get relief from long ailments. Some of the lore say that this temple has been indeed built by sage Agastya.

Similarly, those the others who offered prayers to Lord Shiva in this temple site were Lord Muruga as Muthu Kumara Swami, Lord Surya, Rigveda (one amongst the four Vedas) and sage Agastya. There is another folk lore connected to tell the greatness of this temple. As per the lore, Lord Muruga obtained a trident from Goddess Parvathi in this temple site before he proceeded to fight demon Surapadman. On attaining victory, he came back and performed Pooja to his parents- Lord Shiva and Goddess Parvathi and owed that henceforth he would only perform Pooja to them on all three times of the day. Therefore, it is believed that each day the Trikala Pooja (Three times) is performed by none else than Lord Muruga along with Lord Angaraha.

This shrine has separate sanctums for Lord Vinayaga, Lord Muruga, Lord Bhairava, Goddess Lakshmi, Lord Dhanvanthri and all the Navagrahas. There is a Bana Linga facing the entrance in this temple. Bana Linga is believed to be self-manifested (called Swayambu Ling in Sanskrit) in nature in the form of Shiv Ling. The Swayambu shaped Bana Lingas (Shiva Lingas) are neither carved nor crafted by human hands. Therefore, the Bana Lingas are unique ones believed to be inherited with divine soul of Lord Shiva. This is also one amongst very few unique temples where frequent festivals are going on throughout the year and the said status for the festival is called Nithyotsavam. It is claimed by pundits that such temples where the Nithyotsavam takes place are very rare and if one regularly visits the temples where the festival Nithyotsavam takes place, their thoughts and mind will be filled with more and more positive energies.

There is a water tank in the temple which is called ‘Siddamirutha Theertham’ as established by Sage Agastya. It is believed that if one takes bath in them long suffering ailments will certainly begin to get cured. The address of the temple is : 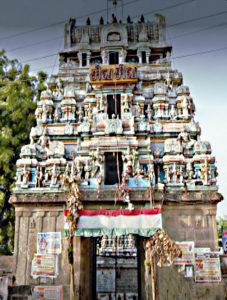 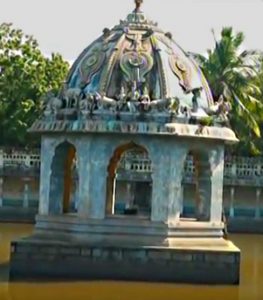 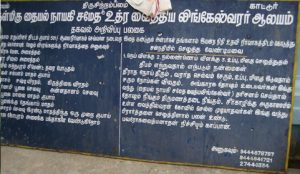 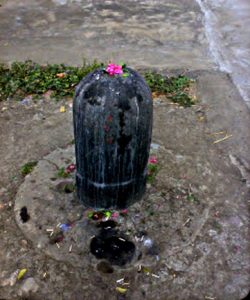