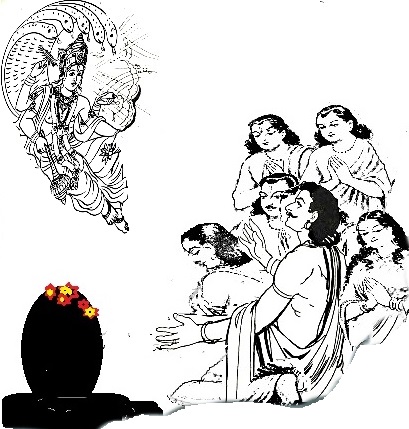 The third Lord Vaitheeswaran temple is in a small village called Pandur in Mayiladuthurai district, Tamilnadu. Pandur is a isolated village in the midst of paddy fields and situated about 9 to 10 km from Mayiladuthurai when we follow Thirumangalam, Kasi route. It was initially known as ‘pandava oor’ meaning the place of pandava and shrunk to Pandur. This is because the five pandava brothers came here and prayed to Lord Shiva to cure their dreaded disease called Pandu Roga. This is also another reason why the place got the name as Pandur  meaning the place from where disease Pandu ran away (Pandu odia oor) . 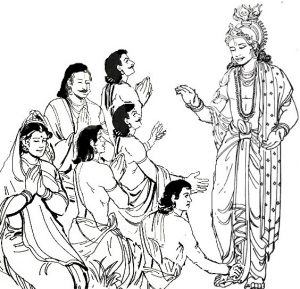 There are nomadic stories that tell Pandava brothers toured many temples of Lord Shiva seeking boons and offered prayers after the Mahabharata war ended. With the victory in the long fought  Mahabharata war  which Pandava brothers  got with the help of Lord Krishna, the Pandava brothers took over the reins of Hasthinapura. Lord Krishna had already decided to go back to Dwaraka to pass rest of his life there. Before departing, Lord Krishna gave long sermon to Pandava brothers thus “Oh, Pandavas, listen to this carefully. With the end of war and annihilation of Kauravas, the purpose for which I manifested has ended. Now I have to go back and complete another important mission which has emerged due to Gandhari who has cursed  that I will vanish with my brethren after 36 years because she felt that I was instrumental in the annihilation of her kith and kins. She failed to understand that it was destiny that destroyed them for their act  of sins.  Whatever it be, her curse has caused another burden on me and I will have to play the role of annihilating another sect like Kauravas before I leave this body. So do not depend on me anymore for your support. However, I can only forewarn you that for the sins of killing your brethren, willingly or otherwise, all of you will have to undergo some divine punishment. The punishment will include affliction of dreaded disease and causing mental imbalance with which you brothers will have to suffer. The end of all your agonies will be the affliction of a dreaded disease called Pandu Roga (Paandu is a dreaded disease related to blood and skin and similar to   anemia that produces not only whitish spots all over the skin but also completely weakens the person who will not be able to even move at one point of time) which will come when countdown to your exit from earth  begins. This will surface after four kala years (what is kala year is not known) from now when I will be in Dwaraka fighting for my own survival with this body. During your exile in forest, you have incurred the wrath of the said disease due to a curse which remains hidden within you, and destined to surface out to trouble you at the end of four Kala years.

At the last stage of four kala years, immediately hand over the reins of the Kingdom to the suitable successor and begin visiting as much Lord Shiva temple  as possible, beginning from  those temples in the banks of rivers where Lord Shiva has manifested by himself as swayambu. In all those places sit  in tapas till you get his vision and only then you must  leave the place to proceed to Himalayas. In the last leg of your life when you will be afflicted with the dreaded disease Pandu Roga, Lord Shiva will appear as Lord Vaithyanathar to remove your disease and also wipe out your sins before granting moksha to all of you. 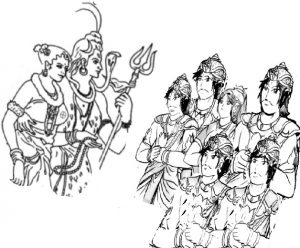 Lord Vaithyanathar is annihilator of all kinds of dreaded diseases and whenever Rishis and Munis besides Deva ganas were afflicted with this dreaded disease, accrued on account of severe curses and sins, they had always surrendered to him seeking relief. Lord Vaithyanathar is none else than the supreme divine called Lord Shiva with his consort goddess Parvathi, who is being worshiped by Lord Brahma, Lord Vishnu and all other divines – male and female, irrespective of their stature in divine world including me who is also an incarnate from him. Yuga after yuga,  he manifest  as Lord Vaithyanathar and one will have to search for him with sincere prayers and to get relief for their grievances. He manifests only before those who are destined to get his grace.  He is one crowned with several thousand names and is the commander for one and all.  That is the greatness of Lord Vaithyanathar.

Oh, Pandavas, begin your journey from the southern end and proceed to Himalayas searching for Lord Vaithyanathar to get your ailment  cured which will automatically wipe out all your sins.  Remember that unless your ailment gets cured, you cannot proceed to Himalayas. On way wherever you get signal to establish temples for Lord Shiva, you may do so and keep proceeding to Himalayas. In Himalayas each one of you will vanish in succession while climbing to  reach the top. By then I would have also departed to heaven to take up another mission” thus concluded Lord Krishna.

The Pandava brothers were sad that Lord Krishna will leave them orphans when his guidance was utmost needed to run the Kingdom, but destiny can not be reversed. They gave farewell to Lord Krishna and bade him goodbye.

Time passed and as indicated by Lord Krishna, the Pandava brothers began losing their health and mental strength. They were not effective in running the administration. An unknown fear gripped their mind and heart and after joint consultation, they  handed over the reins of the Kingdom to Parikshit, son of Abimanyu and began their journey towards Himalayas via southern end.

From Hasthinapur they travelled to Dwaraka, took the blessings of Lord Krishna and began their journey to pious river sides in south traveling by the side of seashore. On many places they visited, they offered prayers to Lord Shiva and even established some temples in states like Maharashtra, Goa, Andhra Pradesh, Madhya Pradesh, Kerala etc (Such states were not existing then and all land were one huge land,  several parts  separated by forests and rivers). When they reached banks of river Cauvery and took bath, they suddenly realized that they were afflicted with a dreaded disease called Pandu roga signalling that their journey had to be quickened to Himalayas. While they were taking bath in river Cauvery, an unknown voice directed them to go to a specific spot where their disease would get cured. The unknown voice was that of Lord Vishnu only. As fear gripped Pandava brothers tried to see from where the voice came,   Immediately Lord Krishna manifested before them in the form  Lord Vishnu and directed them to form a Shiva ling made of clay and then sit in tapas seeking the grace of Lord Shiva to cure their ailment. 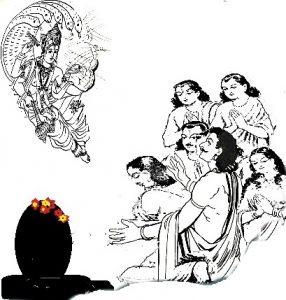 The site signaled to them by Lord Vishnu was Pandur village near Mayavaram and they reached the indicated spot, made a Shiv Ling out of clay and sat in tapas for long period praying to Lord Shiva  to cure their dreaded disease. At last happy with the sincere prayers of the Pandava brothers, Lord Shiva along with goddess Parvathi manifested before them as Vaithyanathar (doctor) and Thaiyal Nayagi alias Balambika and cured their dreaded disease. The Deva gana who  helped the Pandava brothers during their stay in Pandur too settled there to become Sahaya Peruman meaning the one who rendered help. At the request of Pandava brothers, both Lord Shiva and goddess Parvathi agreed to remain there in a temple to cure those who are afflicted with several ailments. Thus when the temple in Pandur was established  as requested by Pandava brothers, Lord Shiva and Goddess Parvathi seated there as Lord Vaitheeswarar and Goddess Thaiyal Nayagi.

As per the temple history separate sanctum for Lord Ganesha exists in the southwest direction, the sanctum of Sahaya Peruman in western side, besides separate temples for Lord Aiyanar and Pidari. There is a statue of Kalabhairavar inside the temple which is reported to be very powerful in removing obstacles. The temple is very small but historical one. The temple authorities claim that the temple is several thousand years old built during Pandava period and  Lord Vaithayanathar who is seated here is senior to Lord Vaitheeswarar seated in the Vaitheeswaran temple near Sirkazhi.

Much details on this temple is not available as this is administered by a family of pundit residing nearby. A very pious temple tank called Surya Pushkaranai exists opposite to the temple and believers claim that if one takes bath in it, their ailments will begin  to get cured early. The temple of Five Pidaris which was grama devatha (Village guardian deity)  is in the midst of Paddy field. The pundit says that those who visit Lord Vaithyanathar temple here should also go to the five Pidari temple essentially to offer prayers to beget the fruits of visit to the temple.  Generally Pidari is considered to be the combined form of Lord Shiva and Parvathi that guards the temples staying outside the temple area  especially that of Lord Shiva. She  manifests as Pidari which is an incarnation of Goddess Kali. Tantrism gives more importance to Pidari worship in controlling evils and souls of different nature and therefore Pidari is enshrined in many villages as  village deity to drive  away the evils and to guard the temples in the Villages. 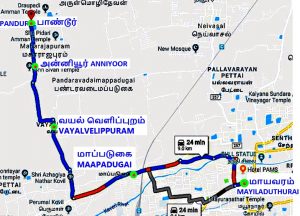 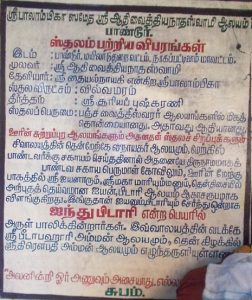 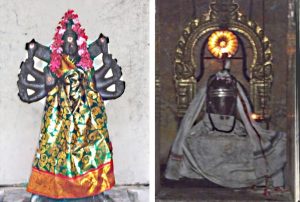 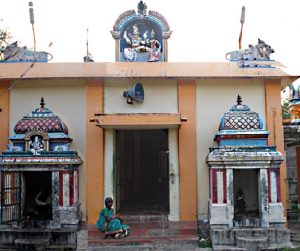 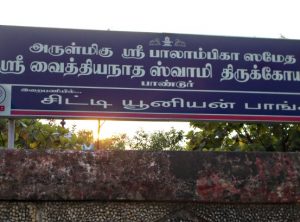 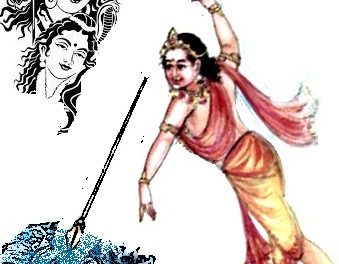