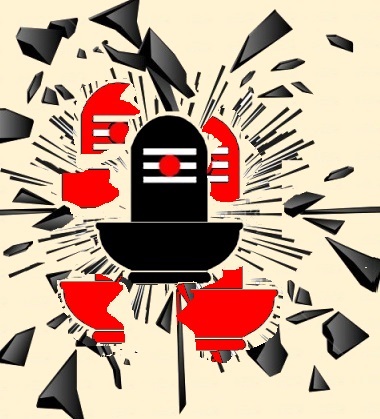 Divine forces like  Lord Chandra, Lord Surya, Lord Indira, Lord Vishnu and Lord Muruga established four temples for worship of Lord Shiva.  They are in Andhra Pradesh. It is stated that the Shiva Lingas in all those five temples were from  Athma Linga of Lord Shiva which broke into five pieces. The five temples together are called Pancharama Temples or Pancharama Kshetras dedicated to Lord Shiva. The Pancharama Temples in which five unique forms of Lord Shiva has been established are located in different sacred places in  Andhra Pradesh. They are:-

The legend on how the temples were established is quite interesting to read.

As per one of the legends, an Asura named Tarakasura performed severe penance and obtained powerful boons from Lord Brahma to the effect that he would be invincible and could be killed only by a son to be born out of Lord Shiva. When the boon was given to him by Lord Brahma, there in Kailas, Lord Shiva was in deep penance and Tarakasura miscalculated that once Lord goes into deep penance, for several years he would not get up and therefore the chances of a son born out from the Lord would not happen and  therefore none were there to kill him. Besides the boon from Lord Brahma, Tarakasura through another penance gained Athma Linga from Lord Shiva which further added enormous powers to his strength.

Armed with so much boons, Tarakasura began torturing and tormenting those in Devaloga. Unable to bear the innumerable tortures the Asura unleashed, the deities, kinnars, yakshas and devas from devaloga reached out to Lord Shiva and Goddess Parvathi seeking protection. Heeding to plea of deities, Lord Shiva and Goddess Parvathi enacted a drama and created Lord Muruga to annihilate the demon Asura. Lord Muruga commenced the war but due to the power of the Athma Linga which the Asura possessed, even after using several powerful weapons Lord Muruga found that the Asura could not be killed and every time Lord Muruga’s weapon killed the Asura, he got back birth instantly in original form. Thus unable to kill him, frustrated Lord Muruga prayed to his parents and they sent Lord Vishnu to advice him suitably. Lord Vishnu manifested before Lord Muruga in the mid of battleground and advised him to first break the Shiva Linga which the Asura possessed and destroy it to pieces. Lord Vishnu further said that Tarakasura would lose the extraordinary powers that he possessed and  could be killed only after a temple for worship of Lord Shiva is constructed with the pieces of the Shiva Ling wherever they fell when it gets broken by the weapon from Lord Muruga. Lord Muruga was again confused as to how he could destroy a Shiva Ling which was his own father.

Lord Vishnu revealed to Lord Muruga that the entire drama was enacted by none else but Lord Shiva himself to manifest at five different places with the same energy from his Athma Linga which he had deliberately sent to earth through Tarakasura. Therefore the entire events have been created using Tarakasura as tool, who in his previous birth was an atheist and killed a boy while he was worshiping Shiva Linga in a jungle. The atheist thereby incurred a curse that he would be born an Asura and get killed at the hands of a son to be born from Lord Shiva. Hence the situation has arisen to kill him now. Lord Muruga followed the advice of Lord Vishnu and threw a fire weapon at the Athma Linga. When the weapon hit the Athma Ling of Lord Shiva it broke into five pieces and fell in five different places. Without wasting time Lord Indira, Lord Surya, Lord Chandra and Lord Vishnu who were waiting for it to happen quickly rushed to those places wherever the pieces of Athma Linga fell and constructed a temple of worship for Lord Shiva. The fifth temple was established by Lord Muruga himself. Once the shrines (the places of worship and not actual building in those period of time), were established Asura Tarakasura lost the entire powers including power of instant rebirth and was killed by Lord Muruga easily. Pancharama is the name given to those five temples dedicated to Lord Shiva. Pancha means five and aroma in Sanskrit means peace. By word of mouth stories the word aroma has become arama. Those five temples are in three districts of Andhra Pradesh namely East Godavari, West Godavari and Guntur district of Andhra Pradesh in India. So it is believed that by visiting the five shrines one will  get peace in mind and harmony in family.

The second story relates to the events when the nectar was churned by Devas and Asuras from the ocean. When the Ocean was churned the nectar came out. Since Devas decided not to share it with Asuras, with the support of Lord Vishnu they conspired to deny the nectar to them. Hurt by the betrayal, Asuras prayed Lord Shiva and got several boons. Once the Asuras got  powerful boons, they waged a war with Devas and in the war that continued for long, the Devas could not win over the Asuras who were headed by Tarakasura who was possessed with several boons from Lord Brahma and Lord Shiva. Unable to conquer the Asura forces headed by Tarakasura, all deities, kinnars, yakshas and devas from devaloga went to Lord Shiva and pleaded for his intervention to save them. Therefore compassionate Lord created Lord Muruga and ensured annihilation of the Asura forces in the war in which the Athma Shiva Ling given by the Lord to Asura Tarakasura too split into five pieces and fell in five different places where the temples for the Lord came up as established by Lord Chandra, Lord Surya, Lord Indira, Lord Vishnu and Lord Muruga. 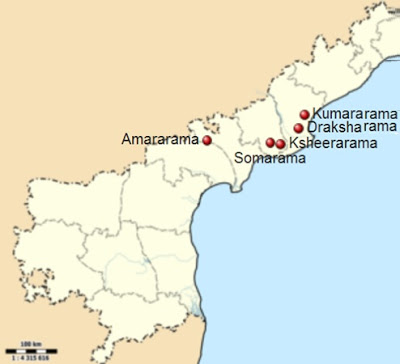 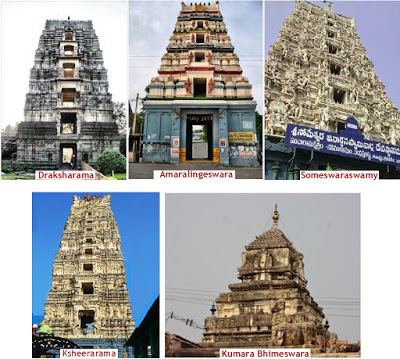 One of the five temples in the Pancharama is Draksharama temple located in Draksharamam near Ramachandrapuram in East Godavari district of Andhra Pradesh. This temple is believed to have been established by Lord Surya. Lord Shri Rama reportedly worshiped here. The main deity, about nine feet high is called Bhimeswara Swamy and his consort is Goddess Manikyamba Ammavaru. Besides Lord Rama other Lords like Indira and lord Surya too prayed Lord Shiva in this temple. Draksharamam is 47 km from Rajahmundry and 42 km from Samarlakota, the nearest railway junction.

The second temple is Amaralingeswara Swamy temple which is located on the southern bank of Krishna River in Amararama in Amaravati town 34 KM from Guntur City in Andhra Pradesh. Lord Shiva is called Amaralingeswaraswamy and his consort as Goddess Bala Chamundika. The temple is reportedly established by Lord Indira with a 15 feet high Shiva Linga. Since the Shiva Linga began to grow in height, as per one of the folklores, to stop the growth of the Shiva Ling, a nail was hit on its head. When the nail was hit blood began to ooze out from the head of Shiva Linga. After sometime when the blood dried it has left a Red mark on its head. The red mark can be seen even today.

The third of the temples belong to the third century and has been reportedly constructed by Lord Chandra, the moon god.  In the temple in Bhimavaram situated in West Godavari district the name of the Lord is Someswaraswamy. Consort of  the Lord is called Goddess Rajarajeswari here. The colour of the linga is believed to be change during full moon day and Amavasya.

The fourth is the Ksheerarama temple in Pallakodu in West Godavari district. This temple is reportedly established by Lord Vishnu. The consort of Lord Ksheera Ramalingaswamy is called as Goddess Parvathi Devi. The Shiva lingam is the tallest one and in unique milky white in color and therefore called Ksheera lingam. Ksheera in Sanskrit means milk. Milk is white in colour; hence the name Ksheera lingam given.

The presiding deity of the fifth of the Pancharama temple is Lord Kumara Bheemeswara Swamy in the form of a big Shiva linga and his consort here is called Goddess Bala Tripurasundari. It is in Samarlakota in East Godavari District. The 16 feet high Shiva linga in this temple is believed to have been installed by Lord Muruga himself. The temple Nandi, the carrier of Lord Shiva and is made out of a single stone. The temple has four entrances.

‘One Day’ package tour is reportedly operated by the  Andhra Government to tour these five Shiva Temples in a single day.