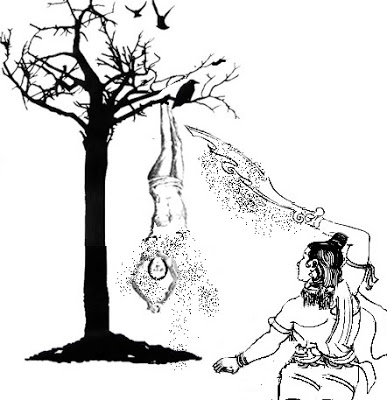 After Ravana was slain, Rama along with Sita travelled in the magic car- Pushpak vimana- which passed through various places which Rama’s feet touched while in search of Sita. On way home during travel Rama lovingly pointed out to Sita the patches of the peaceful hermitages of saintly ascetics, place of their exile, where Maricha in magic form was rested, Jadayu’s martyrdom, Sugreeva and Vali’s land, Hanuman’s surrender and foaming waves and waterspouts of Ganges, Rivers Saraswathi and Sarayu etc. When they reached Ayodhya, they were warmly welcomed by Bharatha who gave back the Kingdom to Rama and which he was administering in Rama’s absence and Rama had no hesitation in taking over the Kingdom. Soon when Sita conceived, the folks rejoiced on hearing the happy news. Generous King Rama’s land was a happily ruled state and like a dream, the days flew past.
Once Rama called his loyal follower (spy) and sought to know what his folks felt about his rule. The loyal servant proclaimed that the folks were happy lots in all spheres of life and while they praised the King abundantly, but their irkness was now pregnant remained Sita, who even without a semblance of doubt Rama accepted, even after her long sojourn in Ravana’s palace. That slanderous feeling imputing foul disgrace to them smote Rama’s heart with crushing force.
Rama wavered for long and summoned his brethren to take their views whether to despise the slanderous talk or to keep the stain upon? Deeply pondering all implications, with heavy grief, but expressed not and held in heart, Rama declared his stern resolve to dismiss his pure Queen and ordered his womb filled spouse to be left in sage Valmiki’s dwelling to dwell in dense woods under his care.
So Sita banished, like ice melting in heat, the time melted, when one day some ascetics came to Rama and sought his help to banish demon Lavanya, son of Kumbesini, sister to demised demon Ravana as he was destroying their rites and sacrifices. Rama unhesitatingly dispatched his brother Sathrughna to destroy demon Lavanya. Sathrughna obeying the command of the Monarch reached the woods and stayed with sage Valmiki to successfully accomplish the task, during when he chanced upon to hear the news of twins to Sita which enthralled him, but mission foremost in mind, he successfully accomplished the task of eliminating Lavanya and on way back to Ayodhya, for a while he returned to his Kingdom to rule for some time before handing over the realm to his sons Swagu and Vegusarugu. Thence self restrained Sathrughna when returned to Ayodhya he received infinite praise from the ascetics for his gallantry in vanquishing Lavanya, and narrated events to Rama, but since sage Valmiki had restrained him from divulging facts on Rama’s twin sons Lava and Kusa to anyone, Sathrughna held the news to self as the sage himself shall bare all facts at appropriate time. Sage Valmiki taught word after word covering all sacred lores and what not to the twins besides the recital of Ramayana* to both Lava and Kusa.
As time passed, there in Ayodhya on a fateful day a Brahmin brought his dead son, placed him before the palace passage and moaned aloud ‘Oh, wretched earth, how do you gulp even after watching bad turning into worse and unnatural deaths occurring under the present King’s rule where as such sins were mirage under his father’s grasp’. His loud voice reverberated the walls of Rama’s Palace.
Hearing the Brahmin’s plaint, Rama came rushing from the Palace gates to assuage the moaned ‘ Oh, Brahmin, be sure, I shall seek out death and bring your son again’. Thus proclaimed Rama summoned his Magic car loaded with deadly arms and set to proceed to Yamalog (Torture den in the world of King Yama who rewards punishment for sins), when an warning voice from heaven spoke ‘Hold, King, hold. Great sin defiles your land. Search the sinner and crush him. Once done, you shall be rewarded the wish you declared’. Thus spoke, the voice muted.
Heavenly voice heard thus, Rama flew in all directions in search of the sinner to take away the sin and continued to travel till he reached a remote place to see a self tormented man in penance, his head hung down from a tree. That was the sin, the style of penance transgressed the forbidden law of penance. Quick was the reaction of Rama who pulled out his sword and cut off the head of the sinner to wipe out the foul transgression with the death of the unknown. In moments, the news of Brahmin’s son restored to life was received to the rejoice of Rama who returned to the Palace fully satisfied when the unknown and appeased Brahmin too departed from there after showering choicest blessings on Rama.
————————————————–
*Brief Clarification:-

The incident which prompted sage Valmiki to compose Ramayana is related to an interesting story:
Once when Valmiki went to the banks of River Tamasa, he happened to notice a pair of doves engaged in the art of mating. Suddenly, he saw the male bird falling down dead, shot by a hunter’s arrow. The female bird, seeing plight of the mated companion flapped her wings, and squawked piteously. On seeing the plight of the female dove, Valmiki’s grief spontaneously burst into fury to release a curse on the hunter in the form of a verse. When grief settled, composed Valmiki wondered how he unleashed curse in verse, untaught to him. As he sat wondering Lord Brahma appeared before him to command Valmiki to write the divine story of Rama which will remain ever cherished and revered by mankind till the earth and mountains thrived. Accepting the mandate Valmiki sat in solace and closed his eyes when the entire sequence of Ramayana, commencing from the birth of Rama to Sita’s banishment sailed in his inner eyes. He deeply etched the entire events in heart and taught memorized Ramayana to his disciples Lava and Kusa. The scholars believe that Valmiki Ramayana in original consisted of story till Sita’s banishment and events beyond may have been composed and added with Valmiki Ramayana in later years by unknown composer(s). In support of their view they cite that the Ramayana recited in Rama’s court by Lava and Kusa portrayed only from the birth of Rama to crowning back in Ayodhya after his return from Lanka vanquishing Ravan. However these lores remain word of mouth stories for generations without supporting documents.