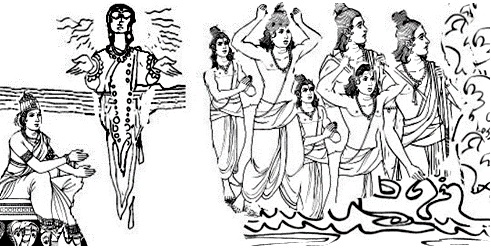 One of the books, Valmiki Ramayana  translated into Tamil, written in the year 1941 by an eminent author called ‘Maha Vidwan Sreemath Prathivathi Bayangaram Annangarachariya Swamigal’ of Kanjeepuram district of Tamilnadu in India  has mentioned under title ‘Samshaeba Ramayana’ in the first Sarga of the book that it was Sage Narada who briefed the epic Ramayana to Valmiki and thereafter, an incident that occurred in the bank of river Tamasa provoked Valmiki and prompted him to compose the Ramayana in verse form.  As he was searching for suitable disciple to pass on the gem, Lava and Kusa came forward to absorb the epic.
The said Ramayana, in the form of verse portraying the valor of Rama has been reportedly composed during the rein of Rama and therefore Lava and Kusa were able to recite them in Rama’s court. However the epic in verse did not attempt to promote Rama a divine incarnate, though the events and narration linked the folks on earth and those in heaven.
The Valmiki Ramayana in original reportedly consisted of 24,000 poems (paras of Verses) spread over seven cantos, narrations covering from Rama’s birth to  his  crowning ceremony. However the mute question that remains unanswered has been whether Ramayana reportedly recited by Lava and Kusa in Rama’s court, foretold the events leading to ultimate fading away of Rama and Sita? The scholars are of the view that the verse composed by Valmiki as we have today is certainly incomplete. Tradition, as narrated in word of mouth stories say that while it is true that the Valmiki Ramayana in its original form consisted of 24,000 versus many of which have only come down to us, but the abrupt end of the verse with Rama ascending the throne confirms the belief that many pertaining to i.e. Rama’s lineage prior to his birth and after his demise may have been lost but mysteriously the same has been narrated by Kalidasa in the epic he composed much after Valmiki lived.  When Kalidasa was able to narrate Raghu’s line before and after Rama’s birth and shedding of incarnation, how could Valmiki not know about them?  Moreover, Kalidasa’s Raghuvamsam mentions the recital of Ramayana by Lava and Kusa  and therefore one cannot brush aside the belief that perhaps Kalidasa could have read Valmiki Ramayana in full based on which his epic may have been composed and that the Valmiki Ramayana in original would have also contained the pre and post Rama clan  but may have been only known to Kalidasa through Valmiki Ramayana in original.