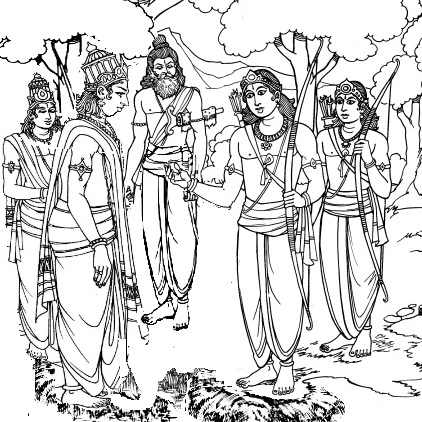 This article has been written differently than my usual style, aim being attempt to form narratives in the poetic style as seen in Raghuvamsam penned by the great Poet Kalidasa.

Vaivachutha was son of Aditya, who descended from the first King of solar dynasty Manu, son of Sun God and their lineage was originally called Ikshavaku Dynasty. Many Kings ascended and descended in Ikshavaku lineage, the one most important King amongst them was King Dilipa who sprang like Nectar in the ocean of Milk. Dilipa was highly pious and benevolent, fathomless in mind and manners, patient and generous, loved and honoured by his folks and whose glory other kings despaired to reach. Though in throne he surpassed the fame of those kings existed around, but unfortunately Dilipa was unblessed to have a son to succeed him. The Royal King’s wife was Sudakshina and the greatest among the sage of Sages, Vashishta, their chief preceptor (Kula Guru or chief priest as they say).
Worried, they were unblessed for a heir to succeed in the lineage of Ikshavaku and therefore went to their Raja guru Vashishta to seek his counsel on this vexed issue. Shri Dilipa and Sudakshina bowed before the saint and clasped his feet in reverence after which Dilipa spoke ‘Great saint, our mentor, you are a beacon to us and guided us whenever and wherever needed. Your blessings are strength of our prosperity and sans of your blessings, we would have remained mere dust. We receive sufficient and timely rainfall to cheer the drought consumed crops. My subjects have neither fear nor pain from evils. Holy sage, we owe all these credits to your patronage and your continued guidance keeps us rule the state free of suffering. Yet holy protector, like agony in ecstasy, in the midst of air of prosperity, childless state of ours torment us forbidding offer of even ‘Pinda dhaan’ (Sacrificial food offering) to our ancestors for we are childless. Denial of Pinda Dhaan shall attract their curses and impede our path to Heaven. Oh, master, needless to proclaim our generosity to our folks. We grant all they need and never failed to lend our helping hands in their helplessness. What harm have we done to remain childless which distress our heart? Help us our protector, be compassionate and bless us to get rid off the state of distress no matter how we shall pay for this debt’.
Sage Vashishta said ‘Dilipa, the cause of your pain is your own. You unwittingly committed a sin in the past leading to get the curse from Divine Cow Kamadhenu. Once in the past, while returning from Heaven, to impress your son born to the queen who too travelled with you and further to display how powerful you were, you failed to pay obedience to the Divine Cow Kamadhenu and hurriedly passed by her side neglecting her. Enraged by your act of indifference, Divine Cow feeling insulted by your act, cursed you in agony that you shall remain childless till you purge your sin by paying due reverence to her posterity’. Her curse is the cause of your present state of affairs and the womb in your spouse remains dry till now’ thus concluded the sage.