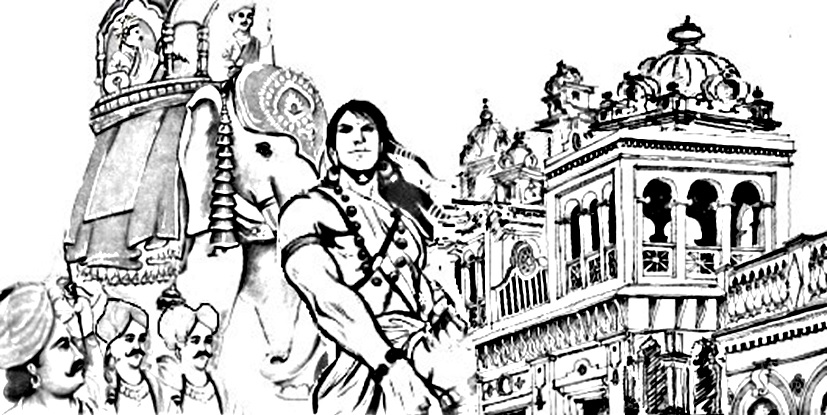 With Sudarshan ascending the throne, the doors of doom opened for the end of Raghu lineage.Though Sudarshan was  young when ascended the throne, he was as fast as others in absorbing the arts of ruling in all sincerity and earned the name mighty King in a short time. His qualities shone like great blue stone in the midst of sapphire, like a fiery Lion, King in Jungle. Fondly admired as Maharaja, as he grew with flower of youth, charm of loveliness spread over his body, his beauty far excelled, he became charm for women’s love, thus slowly absorbing the Kingly qualities of sensual pleasure into his mind and character. Exponent of Kamasuthra he was much sought after by women.
After years of glorious rule end enjoying the earthly life, Sudarshan, fed up in life, handed over the throne to his son Agnivarunan and retired to Naimisaranya’s grove to lead life of peace in the last stages of life. When Agnivarunan sat in saddle, his foes remained crushed, unable to revolt, there was no dearth of funds to administer, rules and regulations were well laid out to ensure effective functioning and his subjects lived in peace, free of concerns from others. Thus Agnivarunan, free from concerns in governing and at the same time unconcerned of his peoples welfare, engaged himself entirely sensual pleasures and wasted his life in ignoble pursuits. No amount of counselling by the council of Ministers would check his pleasure seeking ways. As the days passed, his passion for sensual pleasure instead of waning, only increased thrusting incurable disease on him curbing even his movements and confining him to bed.
As Agnivarunan bore no offspring, gloom stuck the minds of the council on his successor. Even after several years since he ascended the throne, he did not meet folks and rarely met them when someone longed to meet him. Their attention was diverted to tell them that the King was in penance to beget a son and hid the fatal fact of the bedridden King’s incurable, chronic disease from them. As days moved, the King died.
Even after the demise of the King, the fact was kept under the wrap and they called a well skilled priest in funeral rites to enact a drama as if a sacrifice was underway and in the pyre lit, the dead body of the King was secretly laid and put to rest. 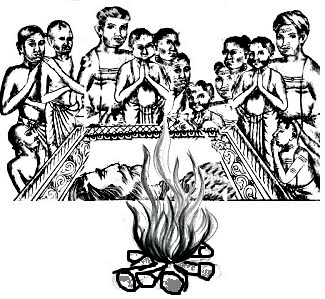 Next in haste they called a meeting and seated on throne the rightful Queen of the demised King, who carried beneath her breast all the royal qualities, since the dead King was left with no issue to rule beyond him. Sat in the royal throne and realizing the break in Raghu’s race, she however sagely ruled the state to flutter the flags of Raghu’s race and as she ruled, the folks in her land fully and willfully honoured all her commands issued. With this narration Kalidasa’s original Raghuvamsa got concluded abruptly. Beyond this, further manuscripts were found missing. 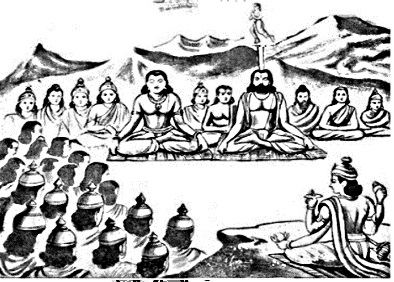