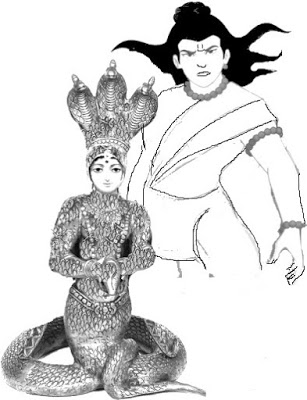 Thus with the exit of Rama and his brothers in Raghu’s line, their sons in order chose as their leader Kusa, who in all respects was valor and mighty amongst them to guide them and reined their respective states in unison. Once when Kusa was in discussion in his chamber, he was confronted with an unknown voice that blessed ‘Goodness surround The’ whence Kusa saw a stranger woman standing before him and asked her ‘Who are you, respectful lady, how did you enter my chamber when the bolted doors barred others entry into my room and for what purpose have you come? Who is your lord (husband) ?
The shabbily robbed women whispered ‘Look King, I am lord of self and guardian Goddess of your ancestral capital Ayodhya after your father demised. Though your folks are happy race under your splendid rule everywhere, but I am pained to see you remaining mute spectator to the subjects in Ayodhya that remains shattered of its beauty and serenity in contrast to the scene under your ancestral rule. What exists today is the desolation of her streets and ruined houses, ever green grass grown spongy streets now carpeted with rough leaves that scratches feet, veils of fair women turned into spider webs barring all, streets are unsafe to venture in night as jackals howls (meaning rogues and ruffians) and evil spirit engages, lo, the river-banks of Sarayu is scattered with the remainders of buffalo and sheep left over by the wild animals. Oh, King, return, quickly engage your attention on Ayodhya  and revive its status’. Thus spoke the lady and vanished. Kusa  shocked to hear the news and unable to see reason, still  in mind thanked for her message and immediately set out motion with schemes generated, got readied his mission with a big force and proceeded to Ayodhya. As his mighty army crossed mount of Vindhya and river Ganges, onway turning dust to mud and again mud to dust. On reaching Ayodhya with speed, he set out to clear the mess, by bannering himself in the city outskirts in a tent, to supervise the operation rescue. The fair town swarmed by his men repaired the buildings, deslited the rivers and ponds driving away the snakes and reptiles there in hiding, and restored the city as if bloomed afresh from green groves. His folks were ecstatic to see their dwelling in the renewed city.
Thereafter he ensured that there was no bar to his folks meeting him anytime to get redressal. Each and every declaration remained not on his lip, but every action spoke of his genuine intent and not law of jungle but law of justice prevailed in redressing the grievances of folks. None of his action or reactions were whimsical, but were as pure as gem and borne out of proper counseling from elders in court. Agent network was strong enough to help him rule with wisdom. He performed Ashwametha Yahya too.
Then came the grievous heat of summer when Kusa with his consorts went forth to bathe and play in river when an ornament held in one of his Princess body, a precious bracelet was lost in water. On command of the King, the fishermen searched up till deep inside the river and found it to be resting on the body of Naga Princess Kumudavathi, sister to the King of snakes, Nargaraja dwelling deep inside water pool. When the ornament was sought back, Nargaraja refused to part with and turned back the messengers of Kusa, empty handed.
Enraged by the reply, Kusa set out powerful arrows to drive away the reptiles and snakes dwelling deep inside the water simultaneously engaging Vishnu’s vahana (Carrier vehicle) Garuda to finish off the snakes. Feeling nervous with Kusa’s anger and Garuda engaged, serpent King Nargaraja came out of the river, paid handsome tributes to Kusa and restored the ornament, and in addition offered his sister Kumudavathi to wed to him which Kusa joyfully accepted and soon wedded Kumudavathi to spend long years in happy union. In few years Kumudavathi bore for her lord a noble son who was named Athithi.

Beginning of an end

Out of two sons Lava and Kusa there was no mention of Lava in any manner or his status after the realm was handed over to Kusa. After Kumudavathi bore a noble son great Athithi, Kusa went on war spree in several directions expanding the Kingdom. There was no dearth of happiness or cheers to his folks anywhere which he ruled or conquered. Later some time When Devendra (Lord Indira) fought a battle with Daithyas, he took valor of Kusa for his help. Though Daithyas were defeated and driven back with their their King killed, yet in the battle long fought, Kusa too kissed death, soon to be followed by agonized Kumudavathi to join her lord in heaven. With the demise of Kusa his noble son Athithi took over the reigns.
Nishadha, King Athithi’s son was his successor after Athithi’s demise, and then the line stretched to Nala and Nabha as successor sons of each. Pundarika followed Nabha, then Kshemadha followed by Pundarika. Kshemadha’s fame was no less to his predecessors in all respects and his folks were happier lots. For some time Kshemadha ruled the Kingdom before handing over the same to his son Devanika and retired to heaven. Ahinahu, Devanika’s heir conquered many Kingdoms in all directions and reigned them well.
Pariyathra was the next in line to Ahinahu, soon followed by successors namely Sila, Kusa (not the one in Lava Kusa) and Unnabha.  Unnabha’s heir Vajranabha’s fame spread far and wide as his rule was comparable to Devendra in might and velour besides fair rule. Vajranabha’s demise brought his son Sanganain throne, soon followed by his son Viyooshidasa who  exercising his mystic powers blossomed from the womb of his spouse to reborn as Visuvadasato reign the nation after the demise of Viyooshidasa. Visuvadasa, a great devotee of Lord Siva after renouncing his life ensured that his son Hiranyanabha took over the reigns. Saintly sage Yagnyavalyaka   reportedly learnt the art of Adhyathma Yoga from  Hiranyanabha. Hiranyanabha’s son Kausala took over the reigns after his father’s demise and he crowned his son Brahmishtha before fading away. During the reign of Brahmishtha, his subjects, enjoyed peace prevailing joyous life. Even Garuda,  carrier vehicle of Vishnu served him so believed the folks. Even as  Brahmishtha was alive, his son Paushya ascended the throne at the request of his father, who guided him in administering the state. Paushya learnt the art of Yoga from Jaini Maharishi whom he adapted as his Guru. Ruling for long period, he retired and enthroned his son Dhuruvasanthi and passed away.
Upright Prince Dhuruvasanthi ruled the earth following his ancestors in all respects including hunting, when on a fateful day while hunting, he was killed by a ferocious Lion. Dhuruvasanthi could not nominate his son as his successor as his son was infant when he died. However when the news of the Kings demise reached the ears of the council they wasted no time in announcing the King’s son Sudarshan as his heir in command and enthroned the infant as the ruler of Ayodhya. 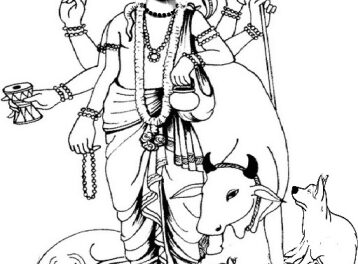