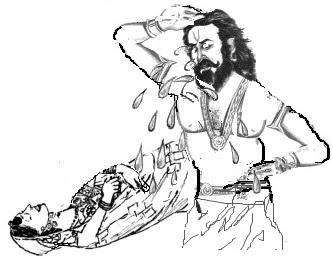 Ayan’s rule was upright, rival kings crushed but not when those who remained mute against the King. Nature gave the glorious hero unclouded happiness and many gems, one being Indumati. There is a saying, sorrow follows joy and true to it, one day after the loving pair happily plucked flowers and leaves and wandered through their pleasant garden, they briefly rested under a tree for a while. Suddenly there fell from the sky a heavenly wreath of flower, from the harp (instrument) of the Divine Saint Narada on to Indumati’s breast. Elated short lived at the touch of the wreath, Indumati’s face paled and in moments fell down lifeless thereafter. Scared at the sight of Indumati’s demise, Ayan too swooned. Shocked followers screamed and cried, no less the  Swans and Parrots too in pond and air. Soon, mourned King raised up to lay her in his lap and wailed uncontrollably.
He was wailing ‘Indumati, what fate is this to kill your tender life by touch of a flower …Oh, my beloved, is this the kind of reward not for the sin, but for the love you and me spread amongst our folks ?  How could you whom I loved the most, leave me forlorn pushing to maimed life… why me alone shall bear the grief?  How shall your slender body bear the roughness of pyre? Fair spouse, wake up…wake up and melt down my gloom’.  As the King wailed uncontrollably, his loyal folks consoled him, removed the queen from his lap and helped him carry out due rites meant for demised, and the  rites with the help of his folks he performed in all honesty. Ten days grief that followed the rites when melted, there came the few counsels (Pupils) of Sage Vashishta to bare all facts on Indumati to the King. They spoke ‘Oh, pious King,  Saint Vashishta  sent us to  brace  your heart and to reveal the facts of this grief. Demised Indumati, nymph celestial in heaven in previous birth, known then as Aruna committed a sin. At the behest of Lord Indira she disturbed the arduous penance of sage Trinabindu, whose penance if succeeded would have unfamed Indira, so imagined Lord Indira and therefore sent her to disturb the penance. Penance disturbed, sage Trinabindu cursed her. When trembled Aruna bowed before to the saint to admit her folly and  revealed   that the act of sin committed by her was forced upon her by none other than Lord Indira, the saint in wrath, Trinabindu, cooled down to soften the curse but said since it has come out of his mouth, it can not be swallowed back and so the nymph shall have to face the boon to born on earth, win a bride thence to lead a happy life for an undisclosed period of time. She shall however be rid of the curse and regain her original status as nymph and return to Heaven again when heavenly flowers from the harp of Divine Saint  Narada fall on her breast’.
The wise counsels from Sage Vashishta continued before departing  ‘Mourn no longer King, and quit your grief since only by destiny the bondage of the nymph with earthly soul has ended. Your spouse on earth in the form of Indumati has departed to regain her status No matter how much you may wail and cry, the soul that has cast off the coils of senses shall not return back.Therefore Oh, King, let peace and sense prevail on you to continue to serve your folks in all fairness, worth your birth’. Thus command of their master carried out, the counsels departed.
But the words of peace from the counsels to Ayan, relieved not the sorrow pierced deep inside agonized heart. After the birth of Dasaratha, in the next eight years, only dreams could relieve grief struck Ayan. However Ayan unable to shed the grief in mind on account of Indumati’s demise, patiently waited till warrior son Dasaratha was crowned as his successor after he was well taught in all parts of Kingship. Once renounced the earthly pleasures of Kingdom, Ayan renounced food and drink too and on a fine day he went near river Sarayu and shed his body in the river.