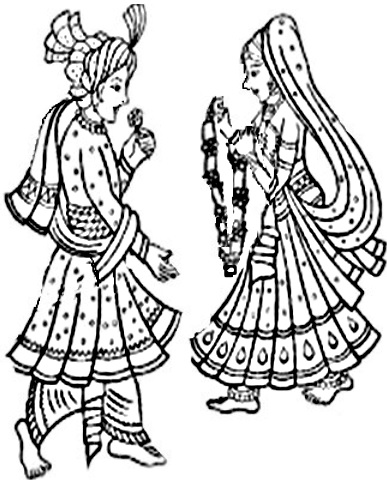 When the swayamvara began in an ambient air, nobly attired Princess Indumati crisscrossed each row in the lofty hall  to make her maiden’s Choice. Lord of beauty for herself, as she walked fast each row, through the veil of cloth which covered her face, she carefully noticed the arts of love expressed by the audience who sought her company in life. On their part, beaming noble chiefs from several states, swarming the hall like cluster of bees in garden, trifled with their gestures to reach the  heart of the maid when she passed through them.
The assembled Princesses and Kings as gesture of pomp displayed their wealth in different ways. While a Prince twirled a Lotus, another carelessly pulled out the diamond necklace hanging from his neck and moved its sides on shoulder, another tossed the gold lined robe hither thither. Unmoved by their explicit art and acts of gestures as Princess  Indumati  went by each suitor King and Prince, the unmindful  abigail (accompanying girl) passing along  with her fair  Princess, led her maid past the Kings in order. The accompanying abigail whispered on her maid’s ears the worthiness and talents of each one of the suitor assemblages as they crossed each one of them.
Exceptional in all, Ayan, noble in beauty, sat silently drowned deep on his own thoughts, unconcerned of other Princes, and waited for his turn when Princess Indumati reached him.  As she reached him, she fully engrossed his attention in the eye to eye meeting. Flashing modesty and grace, beaming Ayan was her selection  ignoring the accompanying dame’s call of ‘shall we pass’. In  flash of moment, when Princess Indumati laid the wreath on the neck of  the mighty dauntless Ayan, there raised loud rejoice from the audience in endorsement of the perfect selection for their union.
Clouds of gloom disappeared from the face of King of Vidarbha who rushed towards Ayan and embraced him, took him to seat of throne followed next to eloquently praise to the assemblages the  talents and virtues of the Prince whom his daughter has selected as her lord and set the stage for knotting Ayan and Indumati.  The Pundits who sat ready to perform the rites lost no time in raising fire in the pit hole (a hole made in the ground for sacrificial fire, also called Yagya Kund) for conducting the rituals for the marriage ceremony, and united both Ayan and Indumati with due rites with assemblages as witnesses to the ceremony. Once the grave marriage ceremonies were accomplished, hallowed by the witness of Fire and hailed by all onlookers, the newly wedded couple got ready to proceed to the land of Kosala and Ayan promised to return back again with his relations.
Thereafter joyous Prince of Vidarbha bade good bye and travelled with the newly wed. The convoy carrying lordly gifts filled halfway path of their home land distance, and the newly wed Prince returned back to his Kingdom to a rouse welcome. Meanwhile the disappointed wooers in swayamvara combined together and followed the train of King Ayan who was on home way journey with his convoy. The vengeance filled combine menacingly obstructed the marchers midway and in the melee attempted to carry off the bride. However alert Ayan placing Indumati to safety, charged back on the invaders with fierce force.  Midway in the ravage battle that ensued, Ayan wasted no time in applying the magical weapon gifted to him by Priyamvadha. At once the foes were completely rooted and battle stilled. Happy and triumphant Ayan returned to Ayodhya accompanied by Indumati.
King Raghu’s ears were adequately posted with the entire episodes through his agents, and even before Ayan reached home the rejoiced King hailed his son’s glory by welcoming the newly wed couple in pomp and style. In the next few days he transferred the yoke of Kingship to his worthy son and tread himself into the jungle for the quite way of parting the earth. Newly anointed King Ayan fared no less in kingship compared to his father as both were supreme in their own manner. His folks felt not orphaned and foes whenever they raised their heads were vanquished.  As the years passed and Ayan entered life’s last stage, he took the counsel of hermits for the joys of supreme by quelling his senses and weaning away the thoughts from earthly pleasures of life to reach the world of bliss. Though for namesake he remained the ruler of the Kingdom, the counsel appointed by him ran the show on his behalf. In the meanwhile detached from earthly bond, his father Raghu too released his soul to join the land of supreme. When the news of his father’s demise reached Ayan, he  broke down and grieved, however on plea of his counsel, soon he absorbed back his grief and returned to  rule  the  Kingdom by himself for the sake of welfare of his folks. In the next few years Ayan was blessed with a son, as bright as Sunshine and famous through entire corners of the world.  The son was affectionately named Dasaratha.