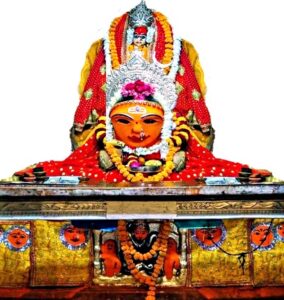 Many temples embodied with tantric and magical powers have been established in Madhya Pradesh. King Vikramaditya established temples with magical and tantric powers in few places and offered prayer and worship. One such temple established by him is  Goddess Harsiddhi  Devi temple in Ujjain, which is also one of the 51 major Shakti Pitas established in India. Legend has it that when Lord Shiva carried his consort on his shoulders, the elbow of Goddess Parvati fell here.

The Harsiddhi Devi temple has been established in many places. In the sanctum of her temple in Ujjain, three Devis are found  enshrined one below the other.  The one on top is Goddess Maha Saraswathi followed by the principal deity Goddess Harsiddhi (She is actually Maha Lakshmi also referred here as Goddess Annapoorna) sculpted slightly bigger in size. The third Devi below the pedestal is Goddess Kali Devi.  Goddess Harsiddhi Mata, is painted in dark vermillion color. Before entering the sanctum one can see the main hall where fifty tantric deities including Sree Chakra which represent the nine forms of goddess Durga have been enshrined on the inner roof top of the hall. The presence of Shree Yanthra which represents nine forms of Durga is one of the characteristic features of this temple.

Harsiddhi temple is said to have been built by Emperor Vikramaditya, the then ruler of Ujjain, who was a man of great intellect, valor and nobleness.  He once visited the main temple of Goddess Harsiddhi at a place called  Koila Tungar in Gujarat where he got her grace. After offering prayers, he requested the Goddess to come to Ujjain and stay in a temple which he proposed to build for her and accordingly after he returned to Ujjain he constructed a temple for Goddess Harsiddhi with tantric and mantra powers. However some people believe that the temple which Emperor Vikramaditya visited was in Minalpur near Miani also in Gujarat. Both Koila Tungar and Minalpur are 30 KM from the city of Porbhandar in Gujarat.   The Minalpur temple was reportedly built and worshiped by Lord Krishna at Miani.  It is believed that the same deity worshiped by Lord Krishna  self-appeared in Ujjain where the present temple exists and Emperor Vikramaditya enshrined the same deity in the temple built by him.  Whenever the Emperor faced any problem, he used to visit both Bhagalamuki and Harsiddhi temples to offer prayers to the Goddesses seeking her grace to end the problem .

Subsequently during the rule of Maratha emperors in the year 1447, the present temple has been renovated and rebuilt. The temple has two towering pine shaped pillars (Columns or Sthamb in Hindi) to hold 1008 oil lamps that are lit up on the eve of every festival especially during the festival of Navaratri.

Two legends are told on this temple.  According to the Shiva Purana, when Lord Shiva carried the burning body of Sati from the sacrificial fire in Daksha Yagna, her elbow dropped at the present temple site and thus the Goddess Harsiddhi Devi temple  came up in this place. The second story is in Skanda Purana about the manner in which the Goddess Chandi acquired the epithet of Goddess Harsiddhi. Once when Lord Shiva and Goddess Parvati were alone in Mount Kailash and playing dice game alone, two demons tried to force their way into their abode. The demons attacked even Lord Shiva’s carrier vehicle Divine Nandi grievously injuring him. Since Lord Shiva could not vanquish them as the demons carried extraordinary powers because of some boons begot by them, Lord Shiva called upon his wife to take the form of Chandi and destroy them. Embodied with the powers of three Goddesses i.e herself, Goddess Annapoorna, and Goddess Kali, whose combined powers negated the powers of the boons the demons carried, she attacked the demons and killed them. Hence Lord Shiva nicknamed her as Goddess Harsiddhi meaning ‘the goddess who would always grant success when prayed’.

Communities like Kshatriya, Brahmin, Rajput and Vaishya worship Harsiddhi Devi as their Kuladevatha (Family deity). Similarly fishermen and  other tribes engaged in  sea-related business too adore the Goddess because they believe that she guard them over the sea.

The Goddess Mahamaya enshrined in a separate sanctum in the Harsiddhi Mata temple is also believed to be a powerful Goddess. Devotees are not allowed to enter into her sanctum, which is below ground level with a narrow passage, where she has been enshrined. Only the priest is allowed to enter the sanctum to perform Pooja to her and the devotees worship her through a grilled window installed in ground level. It is generally believed that all the ill effects of past karmas (Dosha in Sanskrit) would get removed when offered prayer to her. An oil lamp kept there continue to burn uninterrupted over several years. There is a small sanctum for Lord Vinayaga opposite to this sanctum.

The Harsiddhi Devi Temple also houses a mini temple for  Karkoteshwar Mahadev. The legend connected to Karkoteshwar acquiring the epithet Karkoteshwar Mahadev is thus.  Due to a curse once received by the serpents they began to fall in to the pyre of a Yagna performed by Janamejaya and met death.   So many of them went to the Himalayas to perform penance to save themselves.  Serpent King Karkotan went to Lord Brahma and sought advice to escape  the wrath of falling into the burning pyre. Lord Brahma advised them to go to Mahakaleshwar forest in Ujjain and pray to Lord Shiva. Immediately Serpent Karkotan went to Mahakaleshwar forest along with other serpents and sat in penance at the end of which Lord Shiva appeared before him and removed the curse thus ending their nightmare.  Pleased Lord Shiva advised Serpent King Karkotan to sit there in a temple in the name of Karkoteshwar Mahadev and bless the devotees get rid of the sins accrued out of killing serpent by some members in their family even in the past generations.  Hence a mini temple has been constructed for Karkotan in the name of Karkoteshwar Mahadev in which the Serpent King Karkotan has been enshrined with chants of specific mantras relevant to divine serpents across the universe.  It is believed that those who perform Naga Dosha ritual there get rid of their past karmas borne out of sins accrued out of killing serpents by any members in their family including by their predecessors.