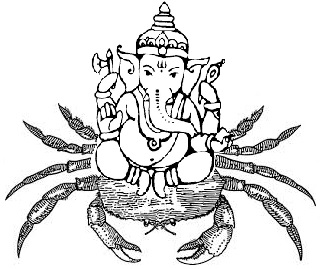 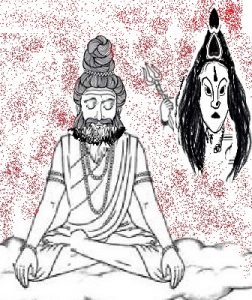 Called Keezhai Thirukkattupalli or Aranyeswaram, the small helmet is situated at a distance of about one to two kms from Thiruvenkadu Melagopura vassal. The Aranya Sundareswarar temple is in the midst of the jungle. It is nearly 14 kms from Sirkazhi and on way to Tharangkambadi from Sirkazhi. Once you reach Thiruvenkadu, enter into Annappanpettai road and reach the temple.

The Aranya Sundareswarar temple is not very big and has been constructed without the usual main tower (Raja Gopura). On the western side of the four side covered wall, there is an arched gate with several sculptured images on it through which one has to enter the temple.

Lord Shiva, reportedly self-manifested here is seated in a separate sanctum facing west while his consort Akilanda nayagi called Akilandeswari is seated facing south in another sanctum. There were reportedly four water tanks called ‘theerthams’ on four corners outside the temple. As per one of the legends once  thousands of years ago this temple was a thick forest area and hence the entire place was called Aranya Vanam which in Tamil means forest. Since the temple was in the midst of the forested land, it got the name Aranyeswarar temple.

According to another folk lore, once upon a time one of the saints named Aranya, ardent devotee of Lord Shiva decided to do penance here. Before commencing the tapas, he prayed to goddess Kaalaambika called Maha Kaala who was staying in that jungle and requested her to protect him from the attacks of the animals and Demons wandering there during his tapas. The goddess stood guard to him and ensured that till he completed the tapas, none of the Animals and Demons came near the site to disturb him. Thus the place came to be called Aranya Vanam i.e the forest place of sage Aranya. On the southern side of the wall in the temple complex, one can see the sculpted image of   a saint and a goddess which is reported to be that of Aranya and  goddess Maha Kaala.

As per one other  legend, there lived a Demon called Visuvaroopan, son of the Demon sage Dhuvatta in Aranyeswaram forest area. Visuvaroopan not only terrorized the celestial staying in that area, but also attempted to perform a powerful Yagna for the complete destruction of the celestial. When the celestial went to Lord Indira and complained of the torture of the Demon Visuvaroopan, Lord Indira came with his army and killed him. Angered by it, Guru of Demon forces, Dhuvatta performed a great yagna in fire and created another Demon called Virudrasura from the fire to help demons defeat Lord Indira. While coming out from the fire, Demon Virudrasura  got a boon that he could only be killed by the great Deva Maharishi Dhatheesi.  Since the Demon who came out of fire could not be easily killed by Lord Indira in the war, he got the backbone of Maharishi Dhatheesi, converted it into a weapon and continued the war to finally kill Virudrasura. Earlier to this episode, Lord Indira had insulted Lord Guru of Navagrahas and attained a sin. Thus after killing Virudrasura, Lord Indira attracted heinous sin of Brahmahaththi Dosha for both the acts and lost the seat of power in Deva Log.

Frightened losing the leadership, Lord Indira ran to Lord Brahma and sought his advice. Lord Brahma advised him to go to Boologa (earth) and pray Lord Shiva in those places where he had self-manifested to get the sins reversed and as suggested by him, Lord Indira came down to earth, began visiting several temples where Lord Shiva had self-manifested and prayed for his vision to get the curse absolved. There are several temples in Kumbakonam and Mayavaram where Lord Indira has reportedly worshiped Lord Shiva to get his sins absolved. One such place which he visited was Aranyeswarapuram, the present temple site.

In order to help Lord Indira get the sins reversed, earlier Lord Brahma had enshrined ten Shiva lings at that temple site and performed Pooja to them. Out of the ten Shiva Lings reportedly established by Lord Brahma, seven Shiva Lings called Dasa Lingas are found in one courtyard, and are in different appearances. Two out of them are seated together in one pedestal called Peedam, which is a rare sight to see in other temples. The most important amongst the seven he has reportedly enshrined is called Brahmeswar. It is believed that by worshiping Lord Brahmeswar, one begets the merit of having attended hundred Ashvamedha Yagnas and all the past sins vanish. Lord Indira did arduous tapas in the temple site and not only got the vision of Lord Shiva and with his grace  he got the Brahmahaththi Dosha removed.

One unique feature in the temple as told by the Gurukkal was that unless the twin Siva Lingas in one pedestal called Muneshwar and Brahmeswar permit, the devotees will not be able to get the darshan of Aranyeswarar to offer Pooja to him in this temple. The pundit in this temple vouch that he has heard  from many devotees that they could not get the darshan of Aranyeswarar even after visiting there several times. (The temple used to remain closed). Many visit this temple with prayers to get back the lost prestige, position and to beget children and to get absolved from the curses (dosha) borne out of  several of the sins committed.

There is a separate shrine inside the temple complex for Lord Vinayaga. He can be seen seated on a Crab instead of his usual carrier vehicle Mouse. The legend goes thus. Once, one of the Gandarva from the celestial unknowingly disturbed the penance of a sage who was  praying in the temple site and got a curse from him that she will become a Crab. When the celestial turned Crab pleaded pardon and sought for reversing the curse, the sage advised her to pray Lord Vinayaga in the same temple complex to get back her original status of a celestial. The celestial turned Crab stayed there and daily performed Pooja to Lord Vinayaga and got the curse reversed. Once regained her original form, she prayed to Lord Vinayaga that in that temple site, she should be allowed remain his carrier vehicle (instead of mouse) in the form of a Crab. Thus Lord Vinayaga can be seen seated on a Crab as his carrier vehicle in this temple site and came to be called Lord Nandu Vinayaga, Nandu in tamil meaning the Crab.

The Pandits and devotees around several  temples in and around Kumbakonam and Mayiladuthurai areas tell many interesting stories on divines. Some of the stories are almost identical and  the stories on many temples mention  that Lord Indira  came to earth and worshiped  Lord Shiva to get the sins afflicted by him  absolved and to get back his lost kingdom in devaloga.   Though all of them are word of mouth told stories, one should not disbelieve the story that Lord Indira came to earth to worship Lord Shiva since such stories as told for the last several centuries cannot be false as people were very pious and god fearing in those periods.

The temple is administered by Shri. Raja Ganapathy Gurukkal,  descendant of Aranya Muni. His phone number is +91 8754542584. Before visiting the temple it is better he is contacted to avoid getting disappointment seeing the closed doors of the temple as it is open only in fixed timings. 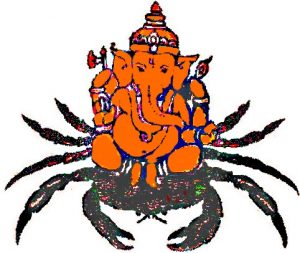 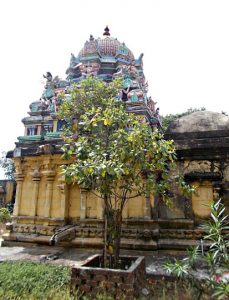 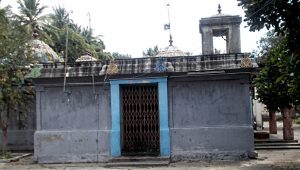 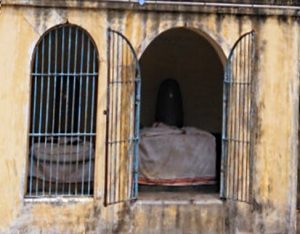 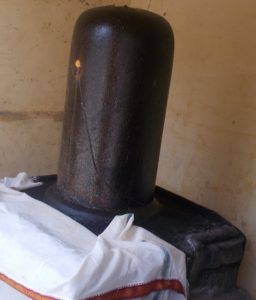 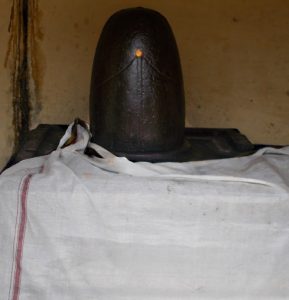 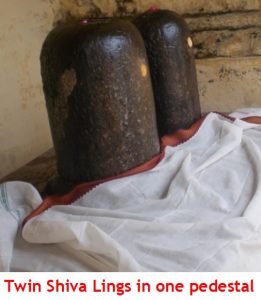 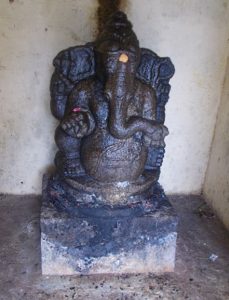 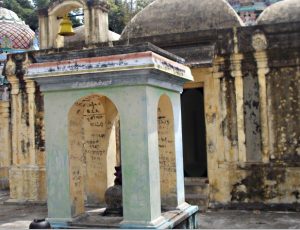 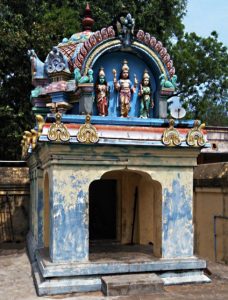 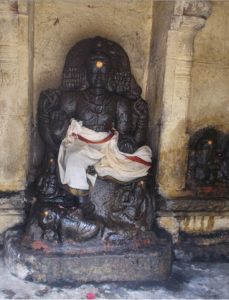 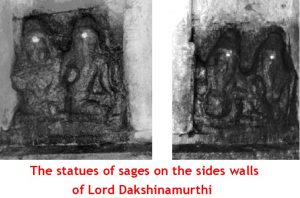 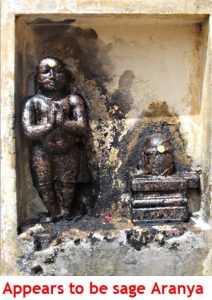 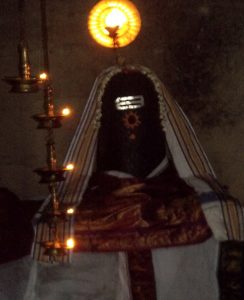 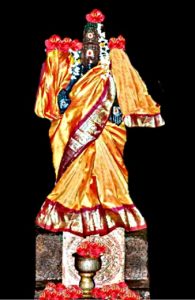 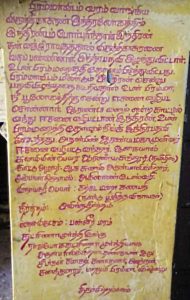 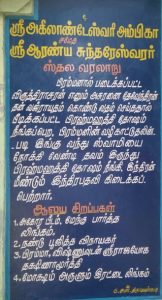 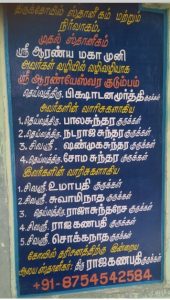 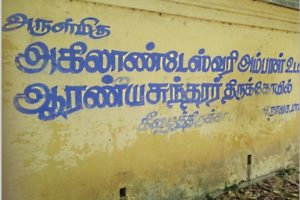