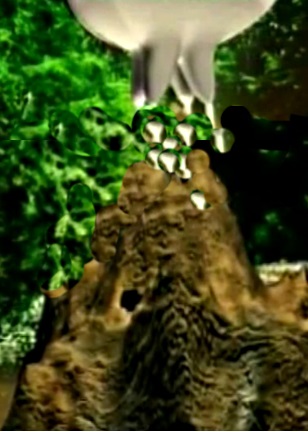 Place where chronic diseases gets cured 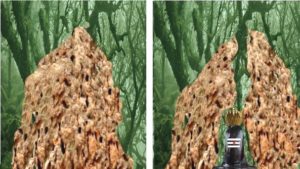 There exists a famous temple for Lord Shiva in Maddur taluk in the state of Karnataka. The Shiva temple in the small helmet under Vaidyanathapura panchayat is called ‘Vaidyanatheswara temple’. The  lord of medicines Vaidyanatheswara has self-manifested to cure ailments of many sorts especially diseases related to skin. The temple is on the bank of river Shimsha which is a tributary river of river Cauvery and lies two Kilometers inside the main town Maddur. The water in the river is unclean since enough rain has not been there last year.

The temple history dates back to the times of Hoysala Kingdom. Lord Shiva called ‘Vaidyanatheswara’ is in the form of a snake. There is an ant hill inside the sanctum sanctorum of the temple from which Lord Shiva reportedly emerged in the form of a Shiva Ling. The Priest mentioned that to get  one’s ailments cured, they have to visit the temple on four Mondays, take bath in the Shimsha river and wearing wet clothes, offer prayers to the Lord by performing archana and abishega. At the end they will be offered the sand of the snake pit as prasad and medicine which they have to mix in the drinking water and consume. The belief is that the divine energy from the sand turns the water into divine and cure the diseases.

As per the present priest of the temple, it is open from morning 07.30 AM to 01.30 PM and later in the evening between 04.00 PM to 08.00 PM.  Panchamruda abishega is done twice a day. Since the abishega or archana is done between 07.30 and 09.00 AM only, those desirous to get the Pooja done on their behalf will have to  pre-fix their appointment with the priest or be available in the temple by 07.00 AM to get it done. The temple has good connectivity by road to travel from Maddur town.

The temple though small has in the main precinct a hall called Navaranga followed by Sabha mandap and Muktha mandap before entering Garbagraha where the Lord in the form of Shiva Linga is seated under a seven hooded snake standing behind covering the head of the Lord. The divine Nandi is seen seated on the left hand side of the Lord in the inner hall in such a manner that it does not block the full vision of the Lord to the devotees. There is a general belief amongst the devotees that a divine serpent lives inside the Garbagraha protecting everyone in the village who offer prayers here.

The walls in the Navaranga hall has sculptures such as Goddess Lakshmi, Goddess Saraswathi, Lord Muruga called Shanmugha, Lord Bhairava, Lord Parasurama and two sets of Shiv Ling one called Edahari (meaning left side stretched)  and the other Balahari (meaning right side stretched). Perhaps those Shiva Lingas may have been installed by penancing Lord Parasurama in that shrine.  Besides those, there is also sculpture of Goddess Mahishasuramardini and Goddess Uma Maheswari in the Navaranga hall which is the first entrance before entering  Garbagraha of the temple. All of them bear the characteristics of Ganga- Chola period architecture. The walls of the temple is simple supported by decorated pillars. No one is allowed to enter either the Garbagraha or muktha mandap.

Over the period of time as the fame and popularity of the worship place in the village spread far and wide, the Kings and other rulers belonging to Ganga, Chola, Hoysala and Vijayanagar dynasties patronized it by renovating and constructing a temple to house the Lord  who was till then seated in open space. The then Dewan of Mysore Sri M Mirza Ismail reportedly visited this temple in 1941 and helped in carrying out development work in the banks of river Shimsha at the foot of the temple entrance. The real history of the temple is unknown to even the priest of the temple who was in mid age. However according to him, the temple was a worship place which existed 2000 years ago in an open space under a tree. 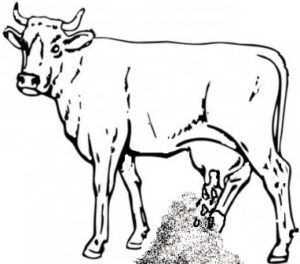 According to word of mouth spread folk lore, thousands of years  ago there was an ant hill under a tree and a milching cow used to daily go and stand near the ant hill at a particular time and released milk from her dug as though she was performing abishega (anointing an object with milk) to the ant hill. One of the curious villager who happened to keep a watch for some time on the strange behavior of the cow hid himself nearby and after witnessing the strange act of the cow spread the news amongst the villagers. Since the villagers used to be staunch believers of God, they too continued to offer worship to the ant hill and one day the Lord appeared in the dream of one of the villagers to tell that he was resting inside the anthill and will manifest at appropriate time to cure the diseases of those who worshiped him in that place. Till then since no medical doctors were available in the villages and only local elders based on experience gained over years treated the ailments with herbs and plants.  As promised, on a heavy rainy day, the pit  broke open into two halves revealing a Shiv Ling seated inside.

The Villagers continued to offer prayers to the Shiv Ling in the same place considering him to be a local doctor and when they prayed for curing their diseases, they were relieved of their problems. The worship place later got constructed into a temple and came to be called Vaidyanatha temple. Besides the main building where the Lord is seated, in the outer campus area of the temple there are separate sanctum sanctorum for Goddess Parvathi, Navagrahas and Sun God called Suryanarayanaswamy.

In the main temple, the first hall before the sanctum has  beautiful sculpture of Lord Parasurama. Only rarely one can see the statues of Lord Parasurama in the temples pf Lord Shiva. In Kannada folklore, especially in devotional songs sung  in villages he is often referred to as son of  Goddess Yellamma who is again incarnation of Goddess Renuka Devi who is an aspect of Goddess Parvathi and therefore has deeper footprints amongst the devotees.  According to village lore, by the end of the Vedic period Parasurama had grown weary of bloodshed and became a sanyasi, giving up his possessions and decided to penance seeking the blessings of Lord Shiva who was cardinal aspect of Lord Dattathreya, who was Guru of Lord Parasurama. He began to travel down from the Himalayas region and finally reached down South and created land of Kerala.  Even though he was sixth incarnation of Lord Vishnu, he was destined to be immortal and believed to be still on penance in the mountains of Mahendragiri. According to Kalki Purana he was to manifest on land to assist Kalki which will be the tenth and final avatar of Vishnu before the universe disappears to re-emerge afresh. He is the only Vishnu avatar that co-exists with other Vishnu avatars like Rama and Krishna. The puranic belief has it that in the Kalki Yuga a difficult penance will be undertaken by Kalki to please Lord Shiva to receive a most celestial weaponry to carry out his task. Since Parasurama was also an avatar of Vishnu he undertook several kinds of penances to Lord Shiva to gain enough strength needed to perform his function during Kali Yuga.

One such place where he must have undertaken devout austerities seeking the blessings of Lord Shiva was the temple site of Vaidyanatha in Maddur because the vast area of land stretching up to Nalamangala from Maddur has several historically ancient temples with footprints connected to Mahabharata in their temple history. During the peak Mahabharata war some crucial periods of war reportedly took place in these stretches. The Pandava brothers along with Lord Krishna camped there when their opponent Bhisma, Drona and Karna were given weaponry training and taught warfare by Lord Parasurama who too was camping there to do penance. The place where the temple exist is tagged with the era of Mahabharata in Dwapara Yuga when Lord Krishna along with Arjun stayed and the place was then known as Arjunapuri.

It is stated that centuries ago the place where the temple exists was earlier an agrahara (the place where only Brahmin community resided enblock) and famous as educational center for Vedic studies. Because of the presence of Adi Vaitheeswara temple it was treated as medical center. Lord Parasurama was fond of brahmins community and protected them on various occasions. Because of his affinity to brahmins, he used to remain in tapas on the banks of rivers near the areas dominated by brahmins. The present temple site being agrahara several centuries ago thus may have attracted Lord Parasurama to go and stay in penance when  some events in the Mahabharata war too took place in that area when he came there to train Karna and others. People in those villages have worshiped Lord Parasurama as their savior.  Probably because of such fact  his statue finds a place in the temple, so goes the belief. Some of the Puranic tale refers that Sage Kadamba too stayed in Vaidyanathapura in an ashram through whom the importance of the temple was spread.

The address of the temple 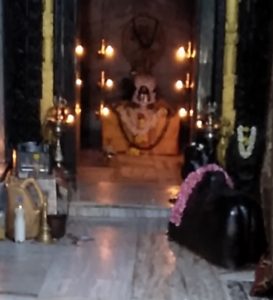 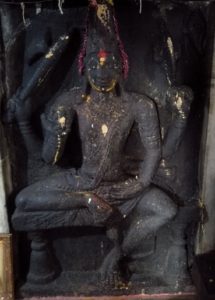 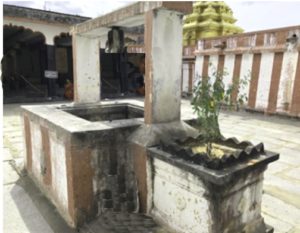 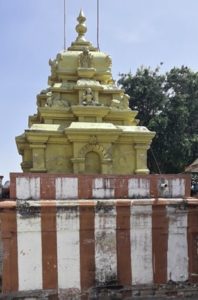 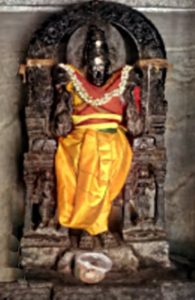 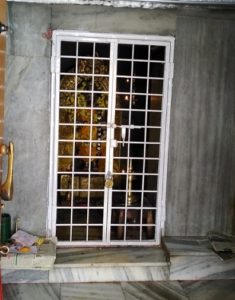 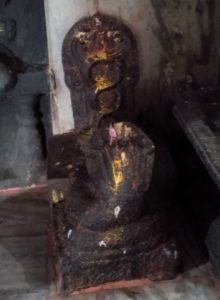 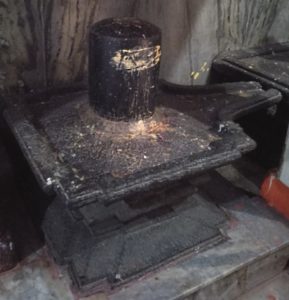 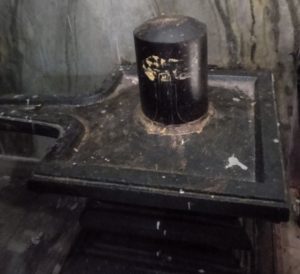 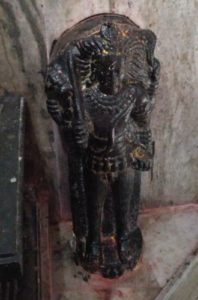 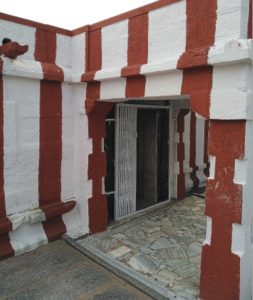 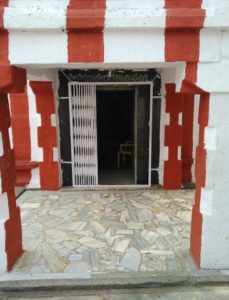 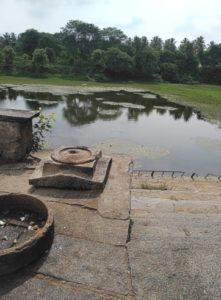 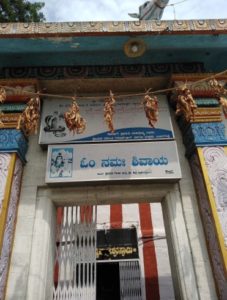 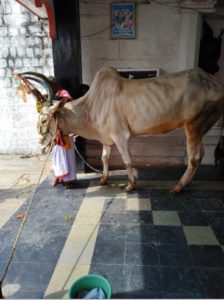 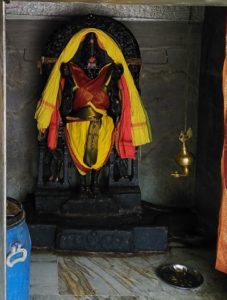 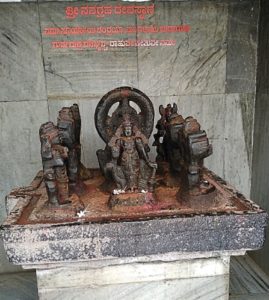 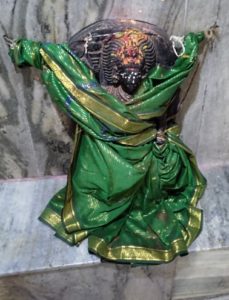 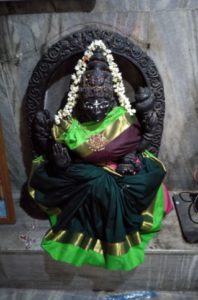 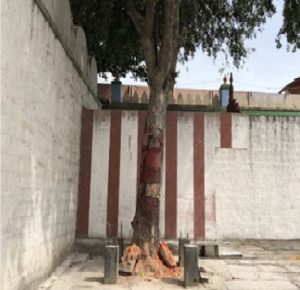 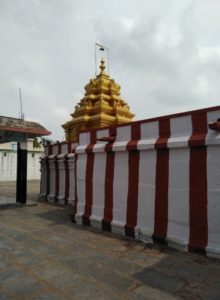