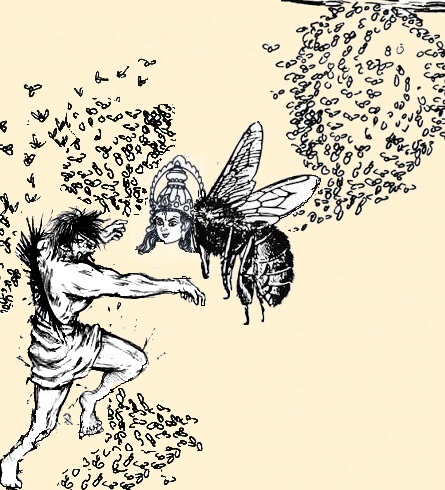 Karnataka state in India has many historical temples. One such temple has been dedicated to the Goddess Durga Parameswari temple in a place called Kateel in the southern part of Karnataka. One can reach this temple from Mangalore or Udipi, two well known cities in the same region. The uniqueness of the temple is that everyday more than twenty  pujas or Homas are performed on behalf of the devotees. The temple opens early at 04.00 hrs in the morning. After the deity is dressed up –called Alankar- the public are allowed to worship the deity from 06.00 hrs. The temple closes at 22.00 hrs in the night.

Long time ago there lived an Asura called Arunasura who had earlier obtained a boon from Lord Brahma to the effect that he would not suffer death from any humans or animals or birds (two legged creatures), or four legged animals, or by any weapons as long as he kept on chanting Gayathri Mantra, a holy chant initiated by Lord Brahma himself to him. After initiating Gayathri Mantra, Lord Brahma told him to recite it continuously either consciously or even subconsciously so that he would not meet death by someone, however with a rider that once he stopped reciting the Mantra and did not resume chanting within a fixed time as indicated by Lord Brahma, any new manifestation emerging during the gap of time with divine power could kill him. Since continuous recital for a long time without a short break was not feasible, some time gap was permitted to revive recital of the Mantra as he had to administer the state with some orders and pronouncements. The inner implication was that he could be killed immediately after the short period of time permitted lapsed unless he resumes chanting the Mantra once again before the expiry of the time gap permitted. Asura Arunasura was so arrogant that he felt that no one could reach him to kill in such a short time and therefore he began to  rule the universe in comfort.

After acquiring the boon, Arunasura went to heaven, drove away devas and settled in devaloga. Lord Varuna, the rain God was also one amongst those driven out of deva loga. Since he was driven out Lord Varuna could not perform his duty as a result of which it did not rain for many years in the universe and lands became parched causing severe drought as no food grains could be cultivated. Further it caused shortage of water as the rivers and tanks dried up and there was no water to drink. People began to die due to starvation and thirst slowly converting the land to cemetery. In the meanwhile the continuous chanting of the Gayathri Mantra made the Asura more and more powerful with none around to kill him. When the tyrannies of the Asura increased, the Celestials went to Lord Shiva and prayed for help. He promised to help them.

In the meanwhile moved by the pathetic condition on earth which led to the death of hundreds and thousands of people, Maharishi Jabali, the great sage decided to perform a Yagna to appease the trinities to intervene and relieve people of their suffering. But the big task was from where to get water and food grains to  perform the Yagna. Therefore he approached Devendra and requested him to send with him divine Cow Kamadenu for performing the Yagna. Since divine Cow Kamadenu was away participating in another yagna, Devendra agreed to send divine Cow Kamadenu’s daughter divine Cow Nandini who was equally powerful like her mother in supplying anything needed in wink of an eye. When Saint Jabali approached divine Nandini and invited her to travel to earth for performing the yagna meant for the welfare of the mankind, she refused to go with him stating that since the earth was full of evil forces and sinners she would not step into the earth.

When repeated pleadings of the Maharishi failed to convince divine Nandini, Maharishi Jabali, in anger, cursed that she be born as a river on earth. Divine Nandini realized her mistake and ran to Goddess Sakthi (Goddess Parvathi Devi) pleading for mercy and to free her of the curse as the Maharishi was refusing to take back the curse. Goddess Sakthi (Goddess Parvathi) explained that once a curse is out from the mouth of a holy Maharishi it cannot be taken back but the curse could only be modified reducing its impact if there was realization of guilt and therefore she advised divine Nandini to flow as a river on earth as cursed and serve the people for some time.  At appropriate time Goddess Sakthi would herself manifest from the same river in some form and free her of the curse. Satisfied by the assurance, divine Nandini emerged as a river from Kanakagiri and ran on earth to turn the earth green once again. Once several rivers and tanks were filled with water flowing through divine cow Nandini, the thirst and hunger vanished, enough food grains were available and people freed of suffering due to the successful completion of the Yagna performed by Maharishi Jabali .

Asura Arunasura was furious and decided to again destroy everything. The trinities realized that Arunasura would not allow prosperity on earth and therefore sought the help of Goddess Parvathi to eliminate him. She reminded them that since the Asura could be killed only if he stopped chanting the Gayathri Mantra, some deceit means would have to be adapted to kill him and therefore suggested that Lord Brahaspathi should first be sent to gain the confidence of the Asura and to tempt him to stop reciting the Mantra so that she could manifest in a new form and kill him. As per plan worked out, Lord Brahaspathi approached Arunasura and successfully gained his confidence to corrupt his mind saying that everyone in the universe including Celestials have already surrendered to him accepting him as supreme, nothing could move unless he desired it. When ruling the universe in such authority why waste time chanting Gayathri Mantra and instead enjoy life in the midst of beauty of nature freely without fear? The continuous flattery from Lord Brahaspathi  fully corrupted the mind of the Asura and in excitement he forgot to chant the Mantra and began enjoying life openly.

Goddess Parvathi who was waiting for such an opportune time to emerge took the shape of a charming woman and began to wander in the garden of Arunasura. Arunasura who was strolling in the garden enjoying the beauty happened to see the Goddess in disguise as beautiful woman  and attracted with her beauty desired to marry her. Enamored by her beauty as he attempted to grab her, she began to run away. Arunasura too chased her and when they ran towards a hill nearby she disappeared inside a rock cave where a big heave of forest bee was there. Arunasura who chased her, attempted to pull her out from the cave without knowing that a big heave of ferocious forest bees was there, and in the act disturbed the beehive. On being disturbed the furious bees flew out of the cave and attacked Arunasura stinging him angrily all over the body. Arunasura in deep pain failed to chant Gayathri Mantra and instead screamed for help when the Devi  who was also in the form of a big, furious bee  came out and stung him repeatedly till he died.

The birth of the temple

After stinging Arunasura to death, the Devi continued to angrily swam in the area. In order to calm down her anger the Celestials led by Jabali performed Abishekam (holy bath) in the same place to an idol of Devi with tender coconut and prayed her to cool down. Acceding to their request she cooled down and emerged in the form of a Shiva Ling in the midst of the river Nandini. Thus divine Nandini too was relieved of her curse over to get back her original form though the river continued to flow there in her name. Several years later a temple came up in the same place where Durga Parameswari is worshipped in the name of Kateel Durga Parameswari.

Katee means waist portion and La means earth, the name of the place where Devi emerged exposing only half her body in the form of a Shiva Linga (When the Linga emerged from the river half of it was submerged in the water i.e up to waist portion) came to be called Kateela and with passage of time the temple came up to be known as Kateel. Durga Parameswari is here for the good of the universe and fulfills the desires of those who come to worship her.