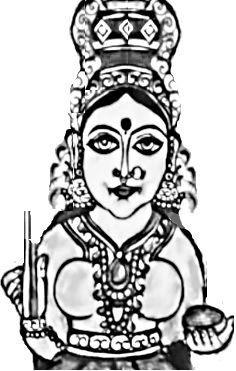 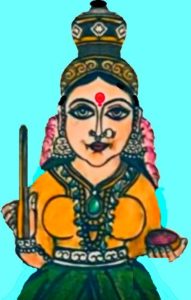 Over two thousand year old temple called ‘Meenkulaththi Meenakshi Amman’ temple exist in a village called Pallasena in Palakkad district of Kerala. To reach Pallasena one can travel from either Kodaiyanoor or travel from Pollachi  to Govindapuram to Kollankottai and from there to Pallasena  or from Palakkad to Pallasena via through Ettimarai. The temple is nearly 22 to 23 KM away from Palakkad main city.

Centuries ago, few families of Veerasaiva Vellaalar sect also called  as Mannadiar, engaged in the  diamond trade lived in areas like Chidambaram, Kumbakonam, Madurai and Tanjavur. They worshiped Goddess Madurai Meenakshi as their family deity. Once upon a time when Chidambaram in Tamilnadu was gripped with famine and drought, it became difficult for people to live there and therefore three families of  Veerasaiva Vellaalar community moved out of Chidambaram and proceeded towards Kerala for livelihood. Before leaving from Chidambaram one of them picked up a stone from Goddess Meenakshi temple and on way they offered worship to the stone as if it was their family deity (Goddess Meenakshi). Ultimately the three families  landed in Pallasena in Palakkad district and settled there to continue trading in diamonds and prospered in few years. While they offered worship to the stone they had carried, they also  visited Madurai every year to offer prayers to their family deity Madurai Meenakshi.

As was a custom in those days, most of the Palakkad people  used to carry an umbrella made of palm leaves to escape from heat or rain. One of the elders in those three families was much aged and could not undertake journey to Madurai every year to offer prayers to Goddess Meenakshi. Therefore he used to daily take bath in a water tank nearby and offered daily worship to the stone with a prayer ‘Oh, goddess, since I am unable to visit you, you must be kind enough to accept my prayer offered from here’. As usual one day he went out to take bath and kept the umbrella and other items nearby the tank, bathed and came back to pick up his belongings and the umbrella. But he could not lift the Umbrella  as though it was firmly embedded in the land.  Since his repeated attempt failed to lift the Umbrella, panicked he called two boys playing nearby and requested them to stay over there till he returned and ran towards his home. He narrated the strange incident and took his relatives to the same  spot  where his umbrella remained still struck with ground. 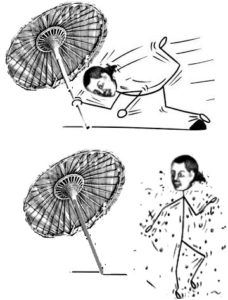 Even other members of the family failed to lift the umbrella and were puzzled over the miracle. They called few more people to see the miracle. In the meanwhile few of them  saw a ring of light over the umbrella. An astrologer was immediately summoned there to explain the phenomenon and the astrologer threw few cowries on the spot ( The process is called prediction with cowries) to read the mystery surrounding the same revealed that Goddess Meenakshi was indeed residing there and desires a temple  be built there for her. Heeding to his advice, they constructed a small shrine and continued to offer prayers in it. 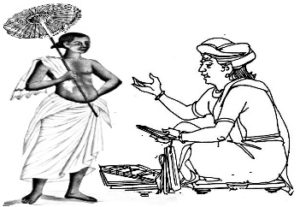 Nearly four hundred years passed and the same Goddess again appeared in the dream of another devotee and urged him to construct a bigger temple for her near the same smaller temple which he complied with the help of locals after collecting sufficient donations for its construction. The water tank was also renovated by raising half walls on all the four sides.

Why was the Goddess named Meenkulaththi ?  According to a lore, since the umbrella of the elderly got stuck to the ground near the  fish pond because of which the temple was established, the prime Goddess in the same was named Meenkulaththi, ‘meen’ in local language  meaning fish and Kulaththi meaning the one who was found near the fish pond. Another lore tells that when she appeared in the dream of her devotee to order him to construct the temple, she revealed that on account of an curse she stayed in the water tank as a fish till the curse was revoked and therefore she decided to seat there  in a temple. Since she lived as fish in the water pond she was called Meenkulaththi, ‘meen’ meaning fish and Kulaththi meaning the one who lived inside the water pond.  The third view has been that the eyes of the Goddess looked like that of  a fish which never sleeps  and always remain awake whether it was day or night.  Since the act of the Goddess has been similar to that of a fish i.e remaining always awake guarding her devotees, she was called Meenakshi ‘meen’ meaning fish and Aatchi meaning its rule.

However before she agreed to stay in the temple, she instructed that henceforth none should catch  fish from that pond as the fish in them stayed with her to  protect  her during the period of her stay in the pond and if any one attempted to fish in, they would face innumerable miseries in their life. Hence no one attempts to fish in the water pond belonging to the temple. 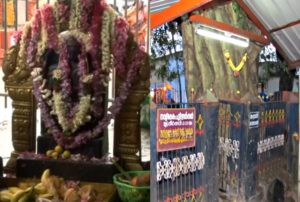 Inside the temple complex, but outside the main temple premises,in a separate shrine  Lord Bhairava is seated and he is considered to be the most powerful lord presiding there. Special Poojas are performed by devotees seeking  specific favours. The main sanctum sanctorum of the temple houses a large idol of Goddess Meenakshi Amman alias Goddess Meenkulaththi Meenakshi Amman. Devotees are not allowed to circumambulate the sanctum sanctorum as is done in all other temples and the reason for the same  is unknown.  One has to enter into the hall where the sanctum sanctorum has been constructed, stand before the deity to offer prayers and then get out of the passage on the left side gate where Sandal paste and flower is given to the devotees as temple prasad. Saptha Maathas (seven female deities), Lord Vinayaga, Lord Ayyappa, Lord Shiva and Goddess Durga are also housed in  separate sanctorums. The temple Flag Post called Dwajasthambam found at the entrance is made of pure teak wood,fully covered with Copper sheet.

Devotees visit the temple seeking favours such as marriage, children and growth and development of their business  or organization and the belief is that such prayers are mostly answered as prayed by them. Importantly it is claimed that those affected by black magic sort of issues if visit the temple and offer prayers, the evil effects from them are fully blunted and nullified by the Goddess. The male members are allowed to enter the temple only if they wear a dhoti and remove their shirt and those wearing pants and shirt  are denied entry. 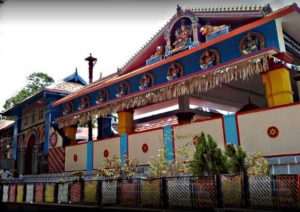 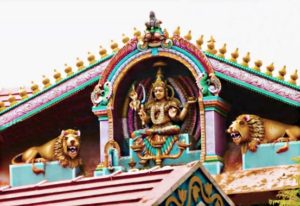 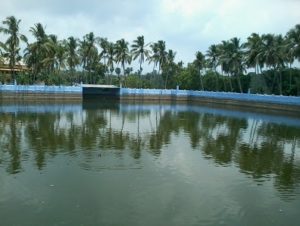 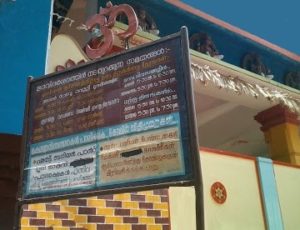 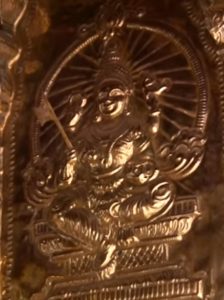 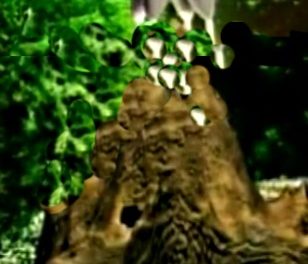