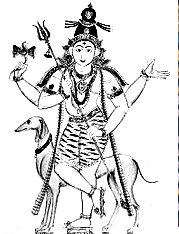 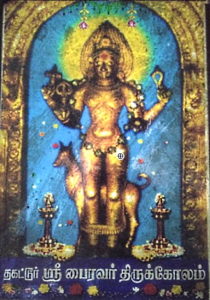 Kala Bhairavar is considered to be a fierce manifestation of Lord Shiva and normally depicted in an aggressive form with angry eyes, blazing hair, tiger’s teeth, snake coiled around his neck and in some idols with even garland of human skulls. Often terrifying, Kala Bhairavar carries a trident, a drum and the severed fifth head of Brahma. His third eye represents eternal supreme wisdom. One’s fear get destroyed when they worship Lord Bhairava. He protects his devotees from dreadful enemies, greed, lust and anger. However the idols enshrined in all the temples do not depict the same form or appearance. In some of the temples he is depicted in sober mood too.

One such unique Lord Kala Bhairavar Temple with interesting legend is found located in a small village called Thagattur in Nagapattinam district of Tamilnadu. The temple is believed to be 1000 to 1500 years old and the presiding deity is Lord Kala Bhairavar. Many devotees are not aware about this unique temple in which when one enters they feel divine vibrations of Lord Bhairavar.  This is one of the very few temples in Tamil Nadu where Lord Kala Bhairavar is the main deity in the sanctum sanctorum called Moolavar in Tamil. Though this temple reportedly existed thousands of years ago in different forms and appearances, the annual Kumbabishegam has been done in the year 2002.

This temple also has shrines for Lord Kasi Vishwanathar, Goddess Visalakshi, Lord Vinayaga, and Lord Subramanya (Lord Muruga) with his consorts Valli & Deivanai, Goddess Durga and Lord Chandikeswara.  It is said that offering worship in the sanctum sanctorum of Lord Viswanathar in this temple, one begets the same fruits and benefits of offering pooja to the same Lord in Varanasi (Kasi) because Lord Shiva himself manifested in the form of Shiva Linga when he enshrined himself in the form of Lord Kala Bhairavar in the main sanctorum of this temple.

There is   a big water tank in front of the temple on the other side of which has a shrine for Village deity called Rowther enshrined with village Goddess Karuppayi and Goddess Kathayee who are believed to be guardian deities of the temple of Lord Bhairavar and serve him there in invisible form. It was interesting to hear that for reasons unknown, Goddess Kathayee of Siththadi remains the family deity for many of the villagers living here.  Rowther is also considered to be the guardian deity of village Thagattur. Traditionally some kind of Yantras are installed in many of the temples and one such Yanthra called Lord Bhairava Yanthra is enshrined in this temple.

An  interesting legend, spread by word of mouth is being told as history of this temple.

At the end of Ramayana war, on the advice of great Maharishis and saints, Lord Sri Rama decided to perform Shiva puja in Rameswaram in Tamilnadu to get rid of the sin of Brahmahaththi Dosha accrued out of killing Ravan in Lanka war. He therefore requested Lord Hanuman to go to then Kasi (present Varanasi) to get him a self-manifested Shiva Linga from there as the then land of Shiva Ling  was  forested and not regularly inhabited by people (as it was barren land near river Ganges).

They fought for several days without an end in sight and the worried celestial  ran to Kasi and pleaded with Lord Bhairavar to end the war explaining that Lord Hanuman was actually the divine ambassador of Lord Rama and he had come there in search of the Shiva Ling at the request of Lord Ram who had to offer Pooja in Rameswaram to get rid of his Brahmahaththi Dosha. Heeding to their plea, Lord Bhairavar calmed down and agreed to accompany Lord Hanuman to reach Rameswaram safely with the Shiva Linga and returned back instantly. Since both Garuda and Lizard acted unilaterally without seeking permission of Lord Bhairavar to help Lord Hanuman, both attracted the curse of Lord Bhairavar and prohibited from entering Kasi anymore. This is one of the reasons why not even a single Lizard and Garuda are not seen in Kasi (Varanasi).

On way, when Lord Kala Bhairavar reached Thagattur, he felt that he had suddenly turned into a small child for a moment only to regain his original form within fraction of seconds. He realized the same as signal for something and therefore decided to enshrine himself in Thagattur (which was similar to Kasi) in the form of child Lord Kala Bhairavar to grace those who worshiped him in that place. On hearing that Lord Kala Bhairavar has enshrined himself there, the nine planets along with several saints and sages rushed there seeking his grace and to attain wisdom. Besides those who offered worship in this temple include Lord Rama, Sage Durvasa, Arjuna, Lord Indira’s divine vehicle Elephant Airavatham, Lord Sun and Lord Moon.

Once upon a time the fort of a King called Athiyaman was established here and the place was therefore known as Athiyaman Kottai (meaning fort) then. Since centuries ago several sages and saints stayed here performing rituals with several forms of Yantras seeking the grace of Lord Bhairava to attain special spiritual and abnormal mystic powers, the place was also called Yanthrapuri. Poet Sundarar has composed several hymns on this sacred place. Devotees visit this temple for fulfillment of removing obstacles in marriage proposals, to beget children, freed of diseases, to attain mental strength and get higher education. Those couples who pray for the birth of a child, tie a cradle with a small idol of child in this temple seeking the grace of the Lord.

The temple has nine different trees each representing one of the nine planets. Therefore it is believed that when one goes around nine times around these nine trees  they are relieved of the bad effects of the planets  reason being their powers are under the control of Lord Kala Bhairava.

Photography is disallowed to take the picture of the main deity in the sanctum sanctorum. From Mayavaram or Kumbakonam or even from Trichy one can conveniently reach this temple via Thiruthuraipoondi. The temple can be easily reached if you travel  in the Nagapattinam-Kodikkarai route. 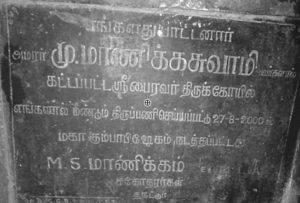 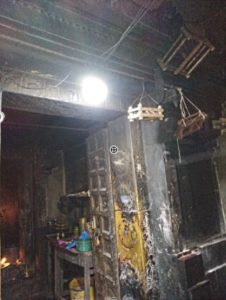 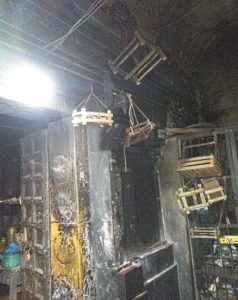 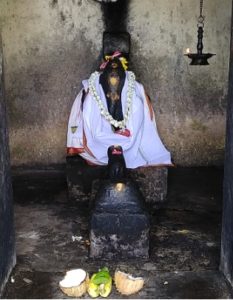 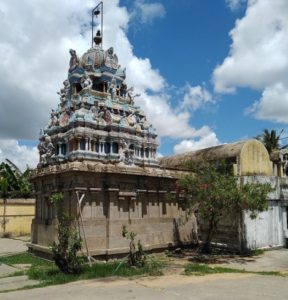 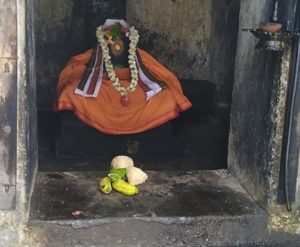 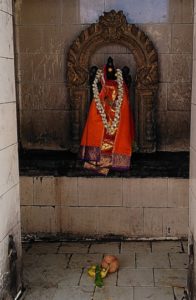 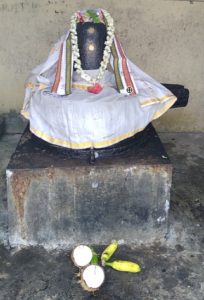 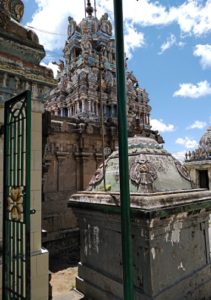 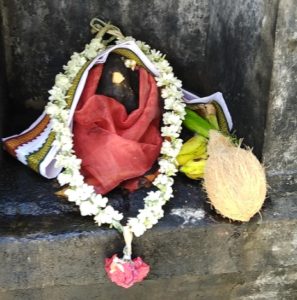 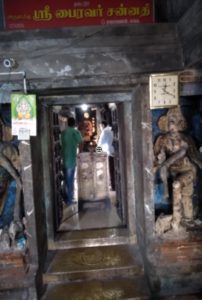 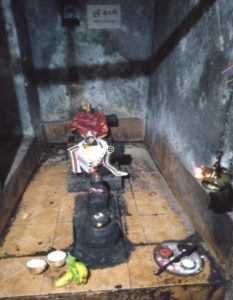 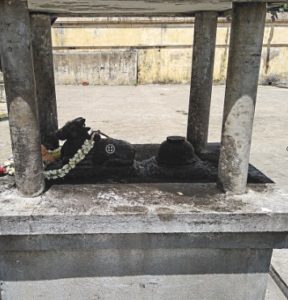