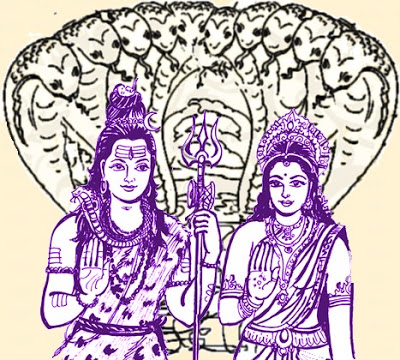 Nag Thakshak is one of the eight most important Serpents in the clan of Divine Serpents and has reference in epic Mahabharata. The other seven Divine Serpents are – Nanda also called Nagaraja, Upananda, Sagara, Vasuki, Manasa, Anantha also called Anavatapta and Utpalaka. Nag Thakshak reportedly ruled Thakshasila a new Kingdom which he created after the episode of burning of Khandava Forest by Janameya occurred. As per Shrimad Bhagavatam Nag Thakshak belonged to Ikshavaku dynasty and born as Serpent due to a curse he had inherited in his previous birth. 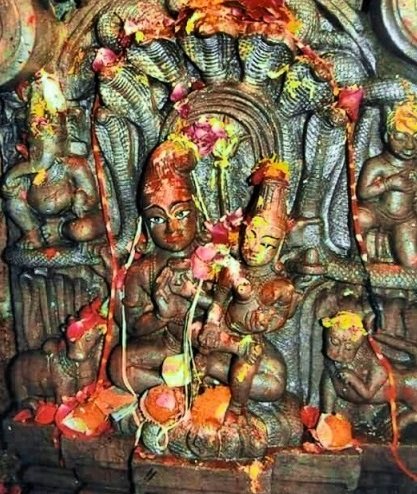 During the era of Mahabharata there lived a King by name Parikshit who was the son of Abimanyu who in turn was Arjuna’s son. King Parikshit incurred a curse when in arrogance he threw a snake to awaken a meditating Rishi who did not open his eyes when the King who lost his way disconnected from his army  was roaming in the forest. Unable to control his thirst and hunger he tried to awaken the meditating Rishi seeking water and food. When the Rishi did not open the eyes, infuriated King caught hold of a dead snake and threw it on the Rishi. Angered by the insane act, the Rishi cursed the King that he would on the seventh day die of a snake bite. However when the King realized his folly and sought pardon from the Rishi, the curse was softened to the effect that if on the seventh day a snake bit King Parikshit and before the poison  spread on his body, if Lord Danvanthri could present himself on that spot and bless the King, then King Parikshit would not die.
King Parikshit wasted no time and sat in tapas praying to Lord Danvanthri to come and stay in his palace till 8th day when the effect of the curse would vanish. Lord Danvanthri an incarnation of Lord Vishnu is physician for the celestials in Devaloga and it is believed that whoever sincerely pray to him  seeking relief even from incurable diseases, they would be blessed accordingly. Responding to the sincere prayer of the King, Lord Danvanthri began to travel to the Palace of King Parikshit. When Nag Thakshak came to know of it, he was worried because he was destined to bite and end the life of the King and therefore decided to somehow prevent Lord Danvanthri from reaching the palace of King Parikshit. 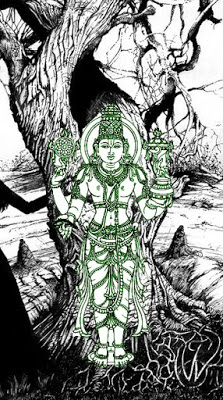 When Lord Danvanthri reached somewhere near Mandsaur village in Madhya Pradesh he rested for a while under a tree where Nag Thakshak with his wife was waiting for the seventh day to enter the palace of King Parikshit to kill him. Realizing that it was the opportune time, Nag Thakshak with his divine power caused severe itching on the back of Lord Danvanthri. Simultaneously he also took the form of a small log of wood and fell from the tree near Lord Danvanthri. Unable to bear the brunt of the itching, Lord Danvanthri took the thin stick fell before him- Nag Thakshak in disguise as wooden log- and scratched his back. The moment the body of Lord Danvanthri was touched by Nag Thakshak in disguise as wooden log, again with his  extraordinary power  Nag Thakshak temporarily imprisoned Lord Danvanthri inside the tree and decided to release him after he accomplished his task of killing King Parikshit.
It was divine principle that whoever is assigned specific duty by the Trinities, they are also vested with special powers which can only be nullified after expiry of the time period for which the power will remain or the act can be reversed only by the one who used it or by any one of the Trinities.

Came the seventh day and there in the Palace, King Parikshit locked himself in a room tightly closed from all sides and none were allowed to enter inside. Not even a gap was left open. Even food was thoroughly checked and given through a small gap which was also sealed after food is given  so that no serpent could enter inside. Nag Thakshak took the form of a small ant and sat under the food carrier to enter into the room where King Parikshit was hiding. Once entered inside the room in the form of a small ant he regained his original form of Serpent and bit the King to death. After Nag Thakshak killed the King Parikshit, he escaped from there similarly, went back to Mandsaur village in Madhya Pradesh to stay with his family and released imprisoned Lord Danvanthri. He also sought pardon for his act and explained him the reason.

Death of his father by a snake angered Parikshit’s son Janameya who in vengeance began Naga Yagna in order to kill entire snakes in the universe. He began performing  Nag Yagna and burnt Khandava forest completely where hundreds and thousands of snakes resided.  As the Naga Yagna commenced and proceeded, many snakes in the universe were pulled into the yagna fire and burnt to death leaving only few more to die. Janameya decided to continue the Yagna till the entire clan of serpents were burnt to death. 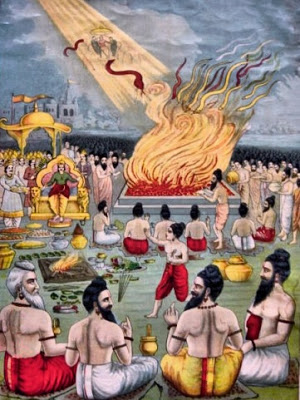 Next to die in Yagna fire was Nag Thakshak and his family who were getting slowly absorbed by the powers of mantras chanted in the yagna. Vasuki, one  other important Kings of snakes which remained alive till then was very much upset. In order to save the remaining serpents along with Nag Thakshak she sought the help of her sister’s son named Aasteek, who was also a great scholar in the Nag clan and requested him to ensure that the Yagna of Janameya did not succeed fully. Aasteek agreed to help and went to the Yagna site in disguise of a Brahmin priest and began chanting hymns in praise of the Yagna.

Unaware of who the priest was, Janameya felt relieved of his mental tension as he heard the melodious hymns which he had never heard before, and went near Aasteek, offered him respects, praised him severely for the wonderful recital which relieved his mental tension and promised to fulfill any wish that Aasteek may ask. Relaxed Aasteek requested for the stoppage of the Yagna and to bring back the burnt snakes to life again. Janameya was stunned as he never expected it and which if agreed would completely wreck his vow and therefore  requested Aasteek to seek fulfilment of any other wish other than the one he had asked, but Aasteek pointed out that the act of the Yagna was borne out of personal vengeance and was not meant for the benefit of the universe since the creatures of all types have been created by Lord Brahma for specific reasons and Janameya had no authority to banish  the creations without consent from the Lord of creation. Moreover Janameya was trying to shield the sinner Parikshit who insulted one of the greatest Rishies who was meditating for universal welfare. Janameya argued for some time justifying his action and tried to convince, but since Aasteek was firm in his demand and refused to accept any other offer from Janameya, he had no other option but to stop the Yagna, lest Janameya would have inherited curse of Aasteek in disguise of a Brahmin priest. Bowing to the demand of Aasteek, Janameya stopped the Yagna and brought back to life all those snakes which had so far burnt in the fire. Naga Thakshak thus got his life saved. After the burnt snakes got back their life, at the request of Janameya,  exercising his extraordinary power Naga Thakshak sent the wandering soul of dead King Parikshit to heaven since he had no power to give back the life of the King who was destined to die as ordained by the creator in the manner he died. 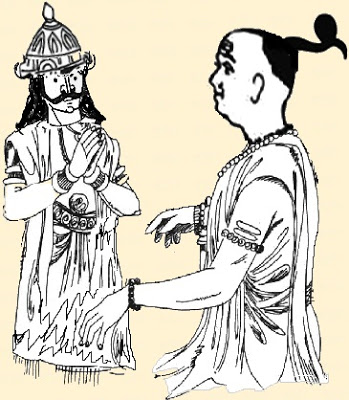 Nag King Thakshak too felt sorry that he had to be an instrument to torment trouble for his clan by killing King Parikshit and therefore repenting his act he went to the present site near Mahakal Mandir in Ujjain, which was then a huge forest then, sat in penance for one thousand years chanting one crore japa every year and sought Lord Shiva’s grace. Pleased with the tapas when Lord Shiva appeared before Thakshak and sought to know of his wish, the Snake King requested that the Lord should grant him immortality and to accept him as his bed in the same place. Lord who appeared before Thakshak on Shivrathri day which was also the day of Nagapanchami, granted him his wish, further saying that henceforth Lord would remain there  along with his consort Parvathi devi and on every Nag Panchami accept the crore manthra Pooja offered by Nag Thakshak. Nag Thakshak was thereafter conferred the name of Nagachandreswar and believed to be present in the temple.
This is why on the day of Nagapanchami lakhs of devotees throng the temple and offer prayers seeking the grace of Lord Shiva and his consort Parvathi in the hope that the devaloga Pooja is being virtually done by the divine Nag Thakshak and offer of prayers on that day will relieve all sorts of Sarpa Dosha if any incurred by their ancestors or family members.

The amazing statue of Nagachandreswar belonging to 11th century was found by a King in Nepal and brought from there and enshrined above Mahakaleshwar temple which has three tier Gopura. In the universe only  in Ujjain  Nagachandreswar temple  Lord Shiva and his consort Parvathi devi are seen seated on the coiled body of divine Nag Thakshak whose ten hoods rest as shade above their head. Only other Lord Vishnu rests on the coiled body of divine Nag Adi Shesha another clan of serpent Gods. This is a rarest of rare scene one witness here.

It is generally believed by historians that King Parmar (folklore refers the king as Bhoj Raja) in whose dream the Lord appeared and directed him to build the temple enshrining the statue of Nagachandreswar, might have built this temple in around 1050 AD and sometime in 1732 King of Gwalior Shri Ranoji Scindia renovated the then damaged shrine. Therefore the gates of Nagachandreswar Temple are opened only on Nagapanchami.

The surviving serpents in the universe built a small temple in honour of Nag Thakshak in the very same place near Mandsaur in Madhya Pradesh where Nag Thakshak was staying with his wife before proceeding to kill the King Parikshit and imprisoned Lord Danvanthri. It was later built into a temple on earth for Nag Thakshak by the locals. This is the only temple in the universe that exist for divine snake Nag Thakshak. The temple is in the village called ‘Dasnaval’ near Khandwa in Madhya Pradesh. Locals call the name of the temple as ‘Thakaji Mandir’ or ‘Thaksheshwar Mandir’ which has the statue of Nag Thakshak along with his wife and son. The tree where Lord Danvanthri was reportedly imprisoned is also seen there.The photos from temple site:- 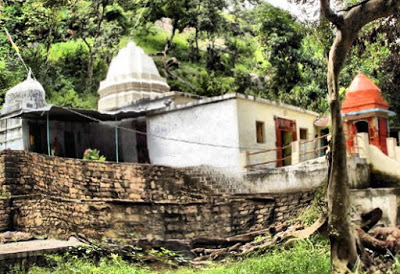 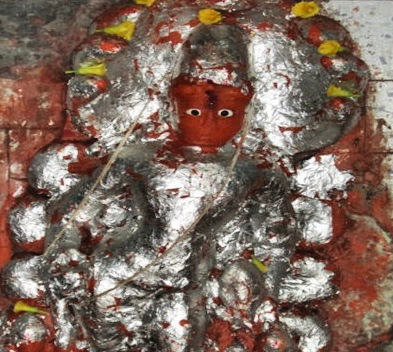 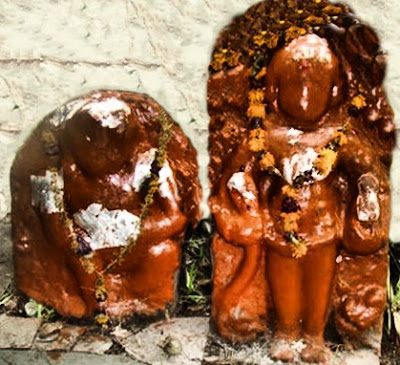