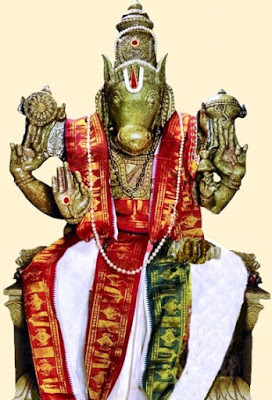 One can not see Horse headed Lord Hayagriva without Goddess Lakshmi seated on his lap in any of the temples except in Chettipunniyam. He is seen in such a posture only in “Sri Devanatha Sri Yoga Hayagriva temple” in Kancheepuram district of Tamilnadu where the Lord is seen in Yogic posture without his consort Goddess Lakshmi. The Lord in this temple graces thousands of devotees who throng there seeking his grace for success in the field of education and other fine arts including that of music. This temple is believed to be thousand years old though some claim that the timeline could be 500-600 years only.

After the universe was born, at the end of Kalpa Kala, deluge struck the universe and Lord Vishnu after fighting ferocious battles with several Asura forces decided to take rest out of tiredness. He went to the ocean and slept on a banyan leaf floating on the cosmic ocean. Only some time prior to that, Lord Brahma rose from the navel of the Lord and began creation first creation being  four Vedas.

When Lord Brahma emerged from the navel of Lord Vishnu, two avaricious demons called Madhu and Kaitabha too emerged from two drops of water on the banyan leaf on which Lord Vishnu was asleep. Out of arrogance, the two asuras  wanted to take over the process of creation and therefore stole the Vedas from Lord Brahma and hid them deep inside the waters of the primeval ocean and sat guarding there in the form of horse faced demons.

The two demons not only stole the Vedas and kept them hidden in the nether world (deep inside the ocean) but also undertook arduous tapas seeking immortality which was unfortunately  granted by Lord Shiva, however with a rider that they would die only at the hands of divine which had horse head. When Lord Vishnu came to know of it, he was worried. He felt the need to destroy the demons to save the universe. Therefore in consultation with Lord Shiva he enacted a drama to retrieve not only the Vedas stolen by the demons, but also to prevent the demons from taking over the act of creation. According to the pre decided plan of action he got his head severed by the string of a bow which he had kept near his head before sleeping. On seeing the tragedy panic struck divine forces rushed to Lord Shiva and pleaded for revival of  Lord Vishnu’s head. He advised them that unless the severed head  is fixed on to the torso of Lord Vishnu’s lifeless body within ninety seconds, Lord Vishnu would not survive. Since Lord Vishnu’s slain face could not be quickly traced anywhere, Divine Viswakarma who was also present with the Celestials brought severed head of a horse and fixed it on the torso of Lord Vishnu within ninety seconds. None knew that the drama was deliberately enacted by Lord Shiva and Lord Vishnu to create a divine with the head of an horse so that the new avatar could kill  demons Madhu and Kaitabha. Thus Lord Vishnu who rose in new avatar with head of a horse came to be called Lord Hayagriva. ‘Hayam’ meant horse and ‘Griva’ means neck, thus Lord Vishnu took up the avatar of Hayagriva i.e one with the head of an horse. Once Lord Vishnu transformed himself into Lord Hayagriva, he immediately proceeded to the nether world, fought with the demons, killed them and brought back the Vedas stolen by them. Since Lord Hayagriva fought with the demons in height of fury, even after the demons were killed, his anger did not come down and therefore at the request of the celestial, Goddess Lakshmi went and sat on the lap of Lord Vishnu and to cool down his anger. Thereafter when the Lord calmed down he asked his consort to get down for few moments and sat with his eyes closed in relaxed posture with perfect physical and mental relaxation. Therefore the Lord in such a posture was adored as Yoga Nidra Hayagriva without his consort. 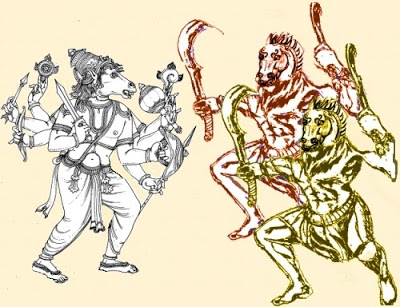 Now read the interesting story and history of Lord Yoga Hayagriva of this temple which is in Chettipunniyam where the Lord is reported to be granting highest order of wisdom.

Once upon a time when several parts in India were under Dutch, Portuguese and Mogul rulers, the Hindu temples were systematically targeted and ornaments looted from them. Not only valuables were looted, but the structures were also destroyed. Therefore in order to save the idols, ornaments and other valuables of the temples, the devotees smuggled them away and hid them in secret places inside dense jungles or in remote places inaccessible to others and worshipped in groups secretly. Only the trusted devotees were aware of those places and the routes leading to those secret temple sites. This prevented the alien rulers from looting the valuables or destroying those idols. The places where the idols and valuables were kept hidden could not be reached easily as  pathways to them were narrow and huge force cannot travel through them. Even then if any of the alien forces attempted to force through them they were waylaid and killed by devotees who were waiting in hiding to attack them. Therefore the alien forces could not loot the valuables, nor destroy those Hindu temples which were secretly operated deep inside the jungles.

Against this background, the idols of Lord Devanatha Peruman and Lord Hayagriva which were secretly worshipped by devotees in a place called Tiruvanthipuram of Cuddalore district of Tamilnadu were shifted secretly to Chettipunniyam in 1848 by the then Divan Shri Rangacahari in order to save them from getting destroyed by the Mogul rulers. Chettipunniyam which is in the Chengleput district of Tamilnadu was in that period surrounded by dense forest on a hilltop. Since the inhabitants of that area  were predominately consisted of Chettiyar community, the place derived the name Chettipunniyam. The hilltop could not be easily climbed by forces and if someone desired to reach the secret site where the idols were worshipped, they have to walk through the dangerous narrow lanes and arduous path, which were under the watchful eyes of trusted devotees guarding the site. The entire path was also covered by thick bushes. The place thus remained highly protected by nature and the devotees.

Initially this temple in Chettipunniyam was constructed for Lord Varadaraja Peruman. However in the year 1848 the idols of Lord Devaraja Peruman and Lord Yoga nidra (in meditative posture) Hayagriva were secretly brought here and enshrined. In the year 1868 to prevent destruction of sacred idols like God Rama, God Lakhman, Goddess Sita and God Hanuman were also secretly smuggled out of a temple in Thanjavur in Tamilnadu and brought here for safety.

Though initially the temple was built in honour of Lord Devanatha Peruman, but God Varadaraja Peruman is mainly worshipped as presiding deity. For several hundred years the devotees were afraid that revelation of the temple site would endanger its safety and therefore the existence of the temple was kept closely guarded secret and the site details were spread to trusted devotees only by word of mouth. Perhaps this was the reason why the greatness of the temple remained unknown to the outer world for many years.

However as days passed, people who thronged Goddess Saraswathi temple in Koothanoor began to get feedback on the greatness of Lord Yoga nidra Hayagriva in Chettipunniyam and visited there to offer prayers as Lord Yoga nidra Hayagriva was Guru of Goddess Saraswathi. Slowly temples for Lord Hayagriva came up in several places as he was mainly considered to be Guru of wisdom. Even in those days only affluent could hire a horse or animal driver cart to visit Chettipunniyam temple as the roads were not easy to travel by foot.

The unique feature of the temple has been that Lord Vishnu in the avatar of Yoga nidra Hayagriva is seen without consort Goddess Lakshmi devi.  Lord Hayagriva with horse head, displaying Abaya mudran, is seen seated alone in Lord Devanatha sanctum. In this temple a separate sanctum exists for Goddess Lakshmi in the name of Goddess Homabjavalli.  In another separate sanctum  Lords Rama-Lakhman- Goddess Sita and Lord Hanuman are seen and the noon arthi and Pooja for the temple is performed only in this sanctum.  In other sanctums the puja and arthi are performed only to the urchava murthies and not to the presiding deities there. The reason for it is not known.

There is a divine tree inside the temple. The name of the tree is Angolam or Azhichchal. Devotees who desire to own a house pull out  some thread from their cloth and tie them on the tree praying Lord Hayagriva to grace them for success of their wish.

What are the aspects of Lord Yoga Hayagriva otherwise called Parimugan in Tamil ?  Pari in Tamil refers to horse. The nose holes on the face of Lord Hayagriva represent the Sandhya kala Devathas, the manes on face reflects the Sun and Moon rays, the eyebrows represent Goddess Ganges and Goddess Saraswathi while the two eyes represent Lord Sun and Lord Moon. The teeth in his mouth represents the Pithru Devathas and finally the lips represents the Brahma Loga. He has four hands out of which one bestow knowledge and the second is found holding Vedas indicating that he was the teacher of universe and therefore considered God of knowledge and intelligence.

The devotees, mainly students, come here and offer garland made of cardamom and pray to Lord Yoga Hayagriva to attain highest level of wisdom. In Koothanoor Goddess Saraswathi temple the students place their personal pens and pencils praying for success in examinations. Similar act is performed in the temples seeking the blessings of Lord Hayagriva  since he was considered to be Guru of Goddess Saraswathi.

This temple is in the opposite side of a place called Mahendra City in between Chennai and Tambaram highway. Once you reach the point of Mahendra city entrance tower, you can see a narrow road leading to the hilltop exactly opposite to it. At the entrance of that narrow road, one can also see a display hoard that shows the way to reach the temple. This temple is open for public from 7.30 AM till 1.00 PM during morning hours and between 4.30 PM till 7.30 PM in the evening. 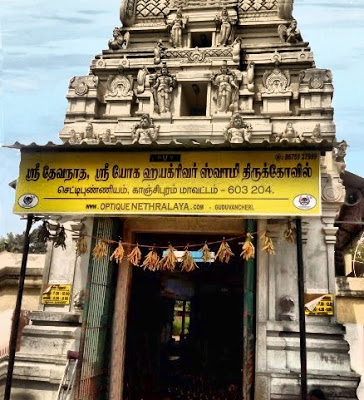 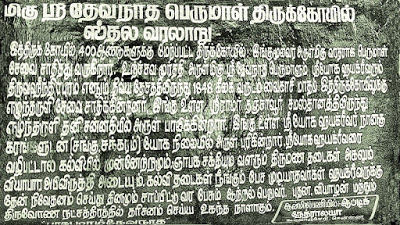 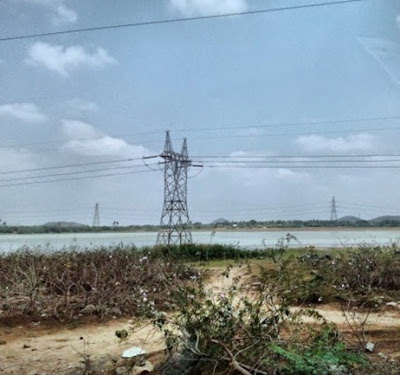 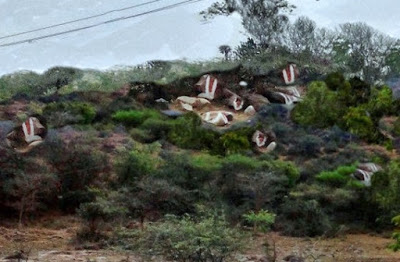