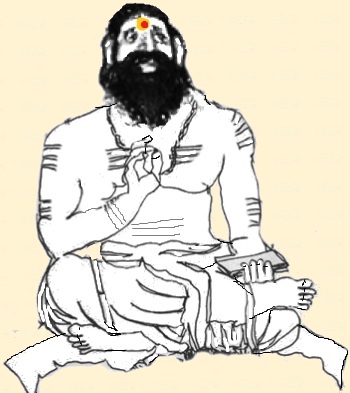 Many Samadhi of Mahans and Siddha Purush are seen in some parts of Chennai city in Tamilnadu. According to a rough estimate there are over fifty Samadhis, with their own vibrant history behind each one of them. It is believed that when  devotees enter the Samadhi sthal of great Mahans, they surely feel the vibrations as they pray standing there. We too experienced unknown inner vibration when we visited Siddah Purush Gurulinga Swamigal Samadhi sthal in Saidapet in the heart of Chennai city. Siddah Purush Gurulinga Swamigal Samadhi sthal is 100 meters away from Karaneeswarar temple in a place called Saidapet.

Though the initial life history of the Swamigal including the year when he was born is not known, only one thing is clear from the circumstantial evidences that he had come from Virudhachalam, a small town in South India from where he travelled to Chennai by foot. On way he reportedly performed several miracles including miracle curing of the incurable diseases of people who sought his blessings. Miracle curing is generally attributed to cure of medically incurable diseases in just few days or instantly. This made many families turn into his devotees, though they have not been documented as such a need had never been felt during the period he lived. The greatness and miracles of many of widely known true Siddha Purushas, Mahans and Saints especially in Villages and rural areas in India are spread only by word of mouth messages or stories through generations. Some of the Samadhis are inside the temples built on them.

The devotees who visit the samadhi sthal of Siddah Purush Gurulinga Swamigal say that some of their ancestors had seen a Shiva Ling developed in his left hand when he was sitting in tapas. The Swamigal used to perform puja for the Shiva ling for a very long time, but none knew where he had left it. His life style was very simple as he carried nothing with him. Therefore none knew what he ate, where he took bath, where were his clothes and other such details. All that the devotees have seen was that most of the time he was seen sitting in meditation in a corner of the temple precinct and whenever he was awake, devotees  went to him seeking his blessings to relieve them of their grievances. He used to simply give them only ash powder called Veeputhi in tamil  which the devotees took as Prasad. He was seen frequently visiting Lord Shiva temples wherever they were there and performed puja and meditated there. Finally he came to Karaneeswarar temple and stayed there till he attained Samadhi.

He spent most of his time sitting in meditation inside the temple precinct in some corner and gave ash powder as prasad and blessed those who went to him. Those who regularly visited Karaneeswarar temple invariably visited him seeking blessings and to get their problems solved. When the saintly person realized that his end had come, he expressed his desire to take Samadhi inside the temple precinct and approached the priest of the temple seeking permission. The temples in those days were autonomous and privately managed and were not under the control of the Govt agencies. When Siddah Purush Gurulinga Swamigal sought permission, the priest turned down his request to tell him that such a event cannot be allowed inside temple precinct. Saddened by the refusal,   Gurulinga Swamigal went away and sat in meditation near a river side in the city.

On the very same day, in the night the temple priest fell very sick with severe dysentery and acute stomach pain. No amount of medication could control the problem. Not knowing what to do, next day he suddenly remembered saint Gurulinga Swamigal who used to cure the diseases and other problems of the devotees. He ran to the riverside where Swamigal was sitting with closed eyes and fell at his feet and pleaded for pardon for his foolish act of refusal to allow the Swamigal to take Jeeva samadhi inside the temple. Seeking forgiveness he narrated his problem to Swamigal requesting blessings and miracle cure as his suffering was unbearable. Siddah Purush Gurulinga Swamigal, opened his eyes and put some ash powder (Veeputhi) in to the Kamandal (a water-vessel of a religious mendicant) filled with water and gave it to the priest asking him to drink. Once the Priest drank the water, alas, in few seconds much to the astonishment of the devotees present there the acute stomach pain and feeling of dysentery disappeared instantly and the priest was standing as if nothing had happened.

Thereafter the Priest requested the great Swamigal to come to the temple precincts and take Jeeva Samadhi wherever he liked. But Siddah Purush Gurulinga Swamigal turned down the request and  showed the priest a place in a small lane near the temple asking him to make necessary arrangements for his Jeeva samadhi on 13th April 1886 at 12 noon.

The priest made all the arrangements as desired by the Swamigal and in the morning on the auspicious day,  Gurulinga Swamigal went around the town in a long march blessings the devotees on way and exactly at 12 noon reached the samadhi sthal and entered into the pit. The devotees closed the lid above and installed the Shiva lingam on top of the Samadhi as per the directions already conveyed by the Swamigal to the priest. Daily Puja and arthi is performed. On the day of Pradhosha hundreds throng this temple to offer prayers in Samadhi. Every year the annual guru Pooja is also performed. 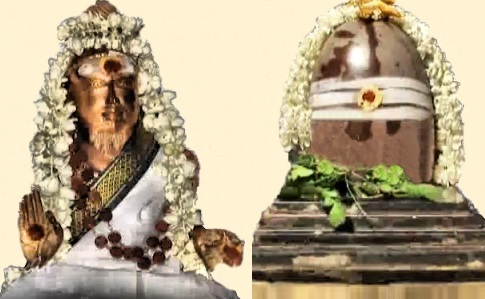 Even today those who visit the samadhi sthal and meditate for few minutes feel inner peace and get invisible blessings of Siddah Purush Gurulinga Swamigal. The ardent devotees strongly believe that the sins and past karma drop like dead leaves from the tree, if they offer prayers regularly in the samadhi sthal. One thing is sure that when you enter the shrine and stay there for some time you feel your heart become lighter and and blissful joy engulfs you, may be because of the compassion and sheer grace of this great saintly person staying there eternally in invisible form. The Jeeva Samadhi sthal cum temple is in the following address near Karaneeswarar temple in Chennai.