Divine Snake Adishesha took birth as Maharishi Pathanjali on earth. Yes, the bed on sea for Lord Vishnu, Divine snake Adishesha took birth on earth to witness the grand dance of Lord Shiva. The vedic scholars are of the opinion that Maharishi Pathanjali, great Yoga adept and master in yoga epitomized the art of Yoga for the benefit of mankind on earth. He reportedly lived sometime between 500 and 200 B.C. Besides epitomizing the art of Yoga, he also composed treatises on Sanskrit grammar (soul and life thereafter) and Ayurveda medicine. When Divine Snake Adishesha took human form as Maharishi Pathanjali he felt that by infusing knowledge in the art of Yoga to select disciples, they can be spread the art far and wide for the benefit of mankind. The parental lineage of Maharishi Pathanjali is not known as no documentation is available to throw light on his parents or his early part of life and all that are told is  in the form of word of mouth stories floating over generations. One of the folklore which is widely accepted narrates that he fell from heaven in the hands of a Yogin and became a human. Otherwise the legends and stories on him are contradicting with  each other.

Divine snake Adishesha still remaining bed for Lord Vishnu on ocean began to meditate for getting his desire fulfilled at the earliest. Simultaneously on earth another event  was occurring connected to this story. A Yogin of high order in wisdom, namely Gonika desired that the knowledge and wisdom which she had gained over years on account of severe penance and tapas should not go waste and reach the mankind for their benefit before her earthly life came to an end. She was in search of a suitable disciple whom she can adapt and impart her knowledge and wisdom since her end was nearing. Taking hint from Lord Vishnu, the Divine snake Adishesha realized that it was the opportune time to reach her to become her adapted son or a disciple so that he can gain human form to witness the cosmic dance of Lord Shiva. 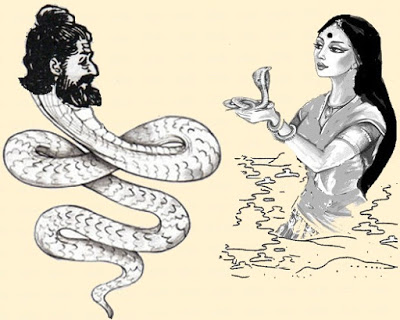 Yogin Gonika too began to offer prayer to God of light- Sun seeking fulfilment of her desire by standing in the midst of river and meditating. One day as she was meditating keeping hands stretched, Adishesha went and sat in her palm in the form of a small snake. As she opened her eyes, she was amazed at the sight of a small snake sitting in her palm and before she could react he took the form of a human and fell at her feet seeking her grace to accept him as her son. She readily agreed because she as Yogin of high order could foresee events. Therefore she adapted him as her son and without wasting time she transferred the entire knowledge and wisdom which she possessed and disappeared in the river since her life cycle on earth ended there. Since the snake fell at the feet of a mother and offered Paathanjali (Paada Anjali in Sanskrit meaning Offering prayer by falling in feet – Paada meaning feet and Anjali meaning offering prayer) he derived the name Pathanjali so goes the folklore. Another lore mentions that she adapted the snake in human form as her disciple and transferred her knowledge and wisdom. Thereafter he came to be admired as  Maharishi Pathanjali, and in the form of Maharishi Pathanjali, the Divine snake Adishesha visited Chidambaram to witness the great cosmic dance of Lord Shiva on earth thereby getting his desire fulfilled. Desire fulfilled the divine serpent  decided to go back and serve his master Lord Vishnu as usual. 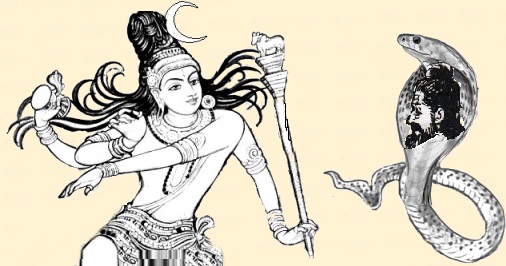 The events leading to the disappearance of Divine snake Adishesha from the human form of Maharishi Pathanjali is also shouldered in mystery as narrated by another lore. When Maharishi Pathanjali realized that his mission on earth was over, he decided to disappear, but not before imparting the Yoga Sutra he had gained to deserving disciples who could spread them for the benefit of mankind on earth. So he declared that he wanted to impart the secrets of entire Yoga sutras to any disciples but put forth a condition that unless 1,000 people got together in a place which he would say, he would not impart the knowledge. Heeding to the call of the Maharishi more than 1,000 people desirous to learn the art gathered south of Vindhya Mountains to listen to him. 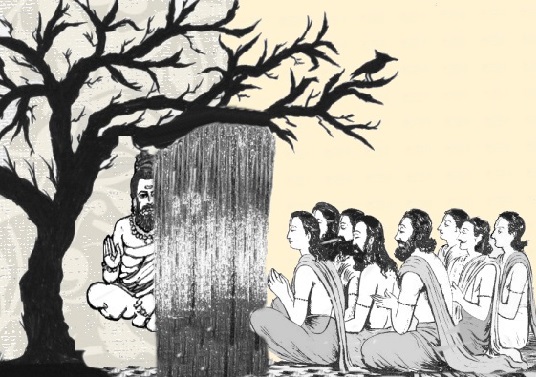 Once everyone gathered, Maharishi Pathanjali put forth another condition. As per the second condition he would place a screen between him and the disciples while transmitting the Yoga Sutra and that till he completed the lecture nobody should attempt to lift the veil that separated them, nor would anyone leave the venue till the teaching session was completed. The session began and Maharishi Pathanjali stayed behind the curtain and transmitted his knowledge to the 1,000 gathered by his power. Each of those present behind the veil  absorbed the knowledge transmitted by the Maharishi. It was an amazing phenomenon and even amongst the disciples, they could not believe how they were able to absorb the knowledge by transmission since the Guru behind the screen ensured that not a word of sound emanated from his mouth, at the same time  the contents of the art intruded into their mind and heart.

As the session continued, one of the disciples in the gathering could not control natures call and therefore went out thinking that he could go quietly and return back quietly without anyone’s knowledge as a cloth veil separated the master and the disciples. In the meanwhile another disciple too became curious to know what the master was doing behind the curtain.  In a haste he ran near the screen and lifted it. Alas, nobody was found behind the veil and there occurred a terrible disaster. Entire fleet of disciples who were still seated there facing the curtain turned into ashes.

The pundits and scholars offers many explanations and float theories as an answer to those questions. Every theory floated has their own merits, but the real purpose for which those events happened remains a mystery in the life of Maharishi Pathanjali. 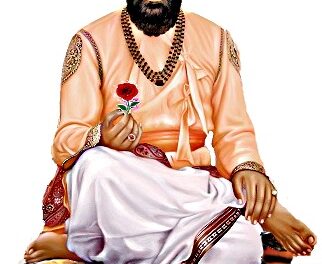