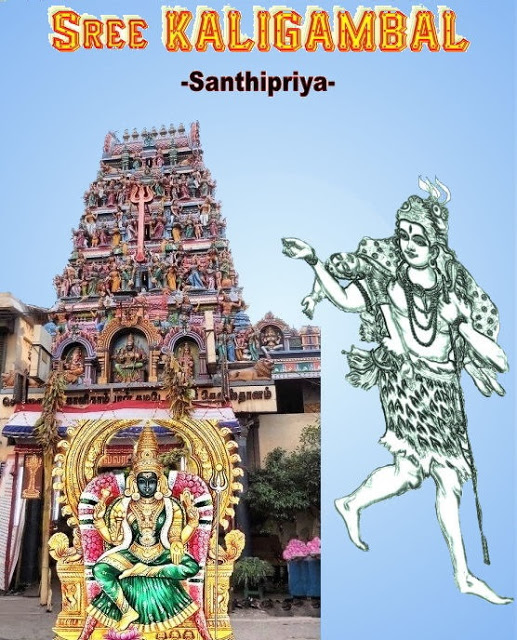 One of the most famous and several centuries year old temple for Goddess Kaligambal,an aspect of Goddess Kamatchi Amman exists in a busy and congested street in heart of Chennai, Tamilnadu. Unfortunately many are unaware of its glory and the historical importance of the deity. Popularly known as Kaligambal Devi Temple, the main deity Kaligambal reportedly manifested in Chennai sea shore some 2000 years back and stayed there for several years before moving into the present temple site. Some are of the opinion that the temple deity is as old as 400 years only, while others dispute the claim to state that though the temple structure is less than 400 years old, the deity enshrined in it is as old as 2000 years. This argument gains strength from the fact that Adi Sankara who lived 2000 years ago reportedly consecrated Artha Meru Yanthra below her leg in order to repress her anger so that the devotees who visit the shrine to pray her will not face her fury. Since the present temple structure has been raised only after 1640 when East India Company(British rulers) reached Chennai then called Madras city, the mute question is how could Sri Adi Sankara have consecrated the Yanthra 2000 years ago? Read the entire story to understand the history.

The history of the temple as narrated by word of mouth folklore goes thus. Several centuries ago an unknown female deity (Present Kaligambal) manifested in the form of a small idol on the seashore in Chennai. Nobody knew how it came there or who placed it at that spot. However since the deity was found on the seashore, people who lived in and around called the deity as Kadal Kanni meaning small girl from Sea. Thereafter when the fishermen found that the small female deity remained unaffected by the sea and even inclement weather they kept her on a raised platform and made it a  practice to enter  into the sea only after offering worship to her. They found that lot of luck befell on them by way of large cache of fishes ever since they commenced worshiping her. Thus in a way she became their guardian deity. They were unaware of the fact that the statue or idol was the iconic body of Goddess Parvathi who was to manifest as Kanchi Kamatchi Amman of Kancheepuram and who left it (the body) there shelved with her divine energies before proceeding to Mangadu for penance. The detailed story on this is narrated in later part of this story. Simultaneously a group of Viswakarmas (the architect of the gods) who lived in and around sea shore too mainly worshiped the deity found on the seashore after constructing a very small shrine (details not known, whether it was thatched hut structure or a mud house) and adapted the deity as their tutelary deity, the reason being Viswakarmaswere considered to be architects of divine and scalped and engraved the statues of deities required for temple constructions. Since the present day temple has been ultimately established and maintained by Viswakarmas this version has been considered to be true.
Those were the days when Tamilnadu then called Madras had three areas near seashore which were predominantly inhabited by fishermen, economically poor and socially lower in status. Those were the days when the division in class and caste were also high in order. Therefore the settlements around seashore were called Kuppams meaning small areas like hamlets. When East India Company decided to entrench in south, they first began purchasing Kuppams near the seashore. The main reason for their decision to buy lands near seashore was meant to ease the transportation of men and material in future. One such prominent Kuppams called Madras Kuppam was located near Parrys Corner and the Britishers first purchased the said land to establish a fort there. Unfortunately the small shrine of Kadal Kanni came within the fort area which came under the purview of Military wing of the rulers (British). Even after the land became the property of the Britishers, the Viswakarmas continued to offer worship to the unknown deity inside the fort area. The Britishers could not prevent the worship. As time passed by twist of tongue of devotees the Kadal Kanni came to be called Kadal Kali meaning the Kali Devi of seashore.

The Britishers felt that frequent visit by devotees inside Fort area could breach their security and therefore in the year 1640 they decided to get the shrine shifted elsewhere without offending the feelings of Viswakarmas and approached them with an offer to bear the entire cost of shifting the shrine to any other place of their choice. Viswakarmas too had no hesitation in agreeing to the proposal as it would help them keep away from the interference of British Military personnel who were basically anti Hindus. Like shifting the bag and baggage, the Viswakarmas were successful in shifting the shrine to the present temple site in Thambu Chetty Street in heart of Chennai. When a suitable site for temple construction was searched the Goddess reportedly sent signals in several ways to her devotees indicating the place where the temple for her shall have to be established (the place where for some time she remained in penance before proceeding to Mangadu) and hence the present temple site was chosen. Since the temple was established in heart of Chennai before 400 years or so, the origin of the temple came to be disputed though the believers firmly aver that the original shrine established on the bank of sea shore was 2000 years old and that was relocated to Thambu Chetty street and therefore the temple indeed belonged to pre 2000 period.

The spiritual gurus while commenting on the present temple site opine that who others viewed as Kadal Kali was actually Goddess Parvathi who may have sat in penance for few days on the banks of seashore and disturbed by frequent visits of devathas and others, she may have shifted to the present temple site of Kaligambal, however remaining invisible to humans, and went to  seashore everyday to take bath and returned back before sunrise to escape the attention of onlookers. This is how when the Goddess commenced onward journey to Mangadu for penance, her lifeless body in the form of idol with her divine energy infused in it was left buried in seashore. The Goddess wanted that at appropriate time she decides the sea sand would clear the way to show the idol. It was the same idol which was worshiped by fishermen and Viswakarmas centuries later. When Adi Sankara had the vision of Goddess Parvathi in the form of Kadal Kali in the present temple site he found the Kadal Kali exhibiting fierce energy and remained in ugraha (fierce) form and therefore for the benefit of mankind he converted her fiery form to that of sober one which is the present form of Goddess Kaligambal.Thus the temple for the devi has actually come up in the same site inside city where she remained in tapas,invisible to humans before proceeding to Mangadu.

As per the folklore on the history of the temple, Kaligambal had initially manifested on sea shore as Kadal Kali and when the Devathas from the sea saw her staying in isolated land, they thought that she was a divine Princess from Sea God i.e Kadal Kanni and therefore began offering their services and prayers to beget reward for previous birth virtues. This is perhaps the reason why the Kadal Kannis remain the Parivara Devathas in the temple. When the presence of Kadal Kali spread amongst the inhabitants of the nether world, the message reached devaloga too and therefore the devathas from devaloga began visiting the devi to offer worship to get rid of their curses of various sins they had committed and to beget reward for previous birth virtues. Besides Devathas those who worshiped her on seashore included visitors like Varunan, Guber, Devendra, Rishies like Pulasthiya, Agasthiya, Parasar, Viswakarma etc. The legend has it that God Guber reportedly acquired lot of wealth only after he began worshiping Kaligambal, then known as Kadal Kali. There is no verifiable historical proof for these folklores, nevertheless the belief continued unabated amongst those who reposed faith in her. However all those events were happening invisible to human eyes. As per the Pundits the greatness of the temple and its merit is found in epics like Machcha Puran, Vaamana Puran, Koorma Puran, Linga Puran and Bhavishya Puran.

When Kadal Kali manifested on sea shore as shadow Goddess of Goddess Kamatchi Amman she was reportedly possessed with the fiery energy of Goddess Kali, though her appearance was benign countenance. After she was shifted from seashore to the heart of the city, she came to be affectionately called Kaligambal. How did she attain the name Kaligambal from that of Kadal Kali? The learned Pundits believe that Kaligambal being shadow deity of Goddess Kamatchi Amman i.e. Devi with aspects of Kali possessing fiery energy + Ambal exhibiting compassion, both combined together came to be called Kali + Ambal i.e. Kaligambal (in Tamil ‘anbu’ meant love and ‘bal’ meaning through i.e. Devi’s compassion through love got twisted as Ambal).The version of some other spiritual Gurus has been that since she manifested on earth to save mankind from the miseries of Kali Yug (in the tenth avatar of Vishnu), she was named as Kaligambal i.e ‘Kali kaalaththil kaakka vantha Ambal’ meaning the female deity who manifested in Kali Yug to save the mankind from miseries. Initially called Kali, once seated in the present temple site she began to be addressed as Kaligambal. Only after several centuries later, spiritual gurus identified her to be the aspect of Goddess Parvathi, the one who created divine Trinity.

Shivaji, the greatest Maratha Warrior worshiped goddess Kaligambal when he visited Chennai in the year 1677. He returned to his kingdom and won a battle. It is interesting to note that he attached the prefix Chathrapathi to his name only after worshiping Kaligambal. Though Shivaji’s ‘Ishta devatha’ was Goddess Bhavani, he attached special significance to Kaligambal and adapted her too as his tutelary deity.

One can see Goddess Kamatchi Amman seated in majestic Padmasana posture holding a sugarcane, and parrot on a lotus in her lower arms, while two divine instruments Pasa and Angusa are held in her upper arms. This posture has similarities in all respects to that of Lalitha Parameswari or Tripura Sundari  thus establishing that the Sakthi Peeda has Goddess Parvathi in a new form.