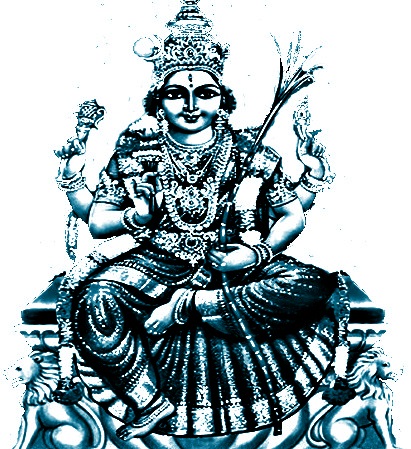 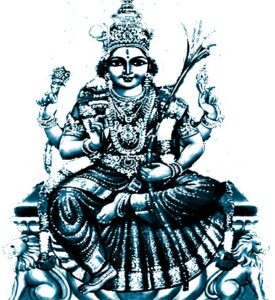 The merchant Samadhi, who had been quietly listening to what Maharishi had said till then asked  ‘Maharishi, you mentioned more than once, the word Devi Suktha. Who is the presiding deity of Devi Suktha?  What is the glory of Devi Suktha recited in praise of her?

Maharishi Medhas continued  “Samadhi, the mantra Devi Suktha is daily prayer slogan to invoke the grace of the Goddess whose glory is infinite. Called Devi Suktha, it is hymn recited on the supremacy of the Goddess.

There are few Sukthas in Rig Veda which have been composed by few  Rishies of feminine gender. One amongst them is Devi Suktha.  Goddess Durga is nothing but the great Goddess Parameswari  herself. As already said, the hymns in it were not composed by humans and although it is not known who had composed them, it is believed by pundits that the hymns may have been compiled by the daughter of the invisible Rishi named Ambruna  and the  devatha was Vak devatha who was also a Brahma Rishi. Why should she compose hymns that glorify the Goddess? There is specific reason for it.

After the universe was created and divine forces made to manifest to protect the universe in all the four yugas created, one of the principle of Brahma mandated that once a divine manifested for each reason, then their  glory, attributes, greatness, divine plays, purpose of the of incarnation, the manner in which they are worshiped, the relevant slokas to appease them etc were made known to the universe by the respective divines by themselves through some medium, lest the very purpose of creation would remain futile and  the mankind to be born in all the four yugas would remain blind to those facts.  The mankind should also know the action-reaction, consequences of karma,  the remedies for non compliance of dharma , and the manner in which the deity were worshiped.  The mandate was meant for  the respective incarnate deities who ensured that the incarnation were made known to the universe through  Maharishis, sages, and celestial forces in many ways and means.  So whenever they manifested, they ensured that their attendant celestial and other devaganas  spread the glory and greatness on them by word of mouth stories  through Sages, Saints and Rishis some of whom spread them in the universe as they heard as such, while some scribbled them on palm leaves and left them in the universe. This is why Goddess Parameswari too wanted that the purpose of her incarnation and mode of worship be made known to the universe  through her attendant Vak devatha. When the task was entrusted to Vak devatha, she wanted to compile them as hymns only after personally experiencing  greatness of the Devi. Therefore, before compiling an hymn on her, she sat in taps, and attained enlightenment and merged with Paramatman  and  remained in the divine energies of the devi  for some more time destined to her, experienced Devi’s divine attributes and acts and compiled the hymns on self in the state of Atma Sthuthi. Atma Sthuthi means self praise. When the destined time graced to her to experience on Devi’s greatness  ended, the Vak devatha went  back  to her original form and  orally  narrated  the glory and greatness of Devi in the form of a hymn to  Maharishi Veda Vyasa who in turn  divided ancient Vedic scripts into four parts based on their use in the sacrificial rites, and taught  to his four chief disciples – Paila, Vaisampayana, Jaimini and Sumantu.This is how the Devi Suktha came to be known to the universe. What did the Devi proclaim ? Through the hymn she said:

I move along with Rudras, the Vasus, the Adiyas and Vishvavedas and they are within me. I ensure Varuna, Indira, Agni and other devathas called celestial  to retain their honour.

I grant abundant wealth to the performer of  Soma sacrifice and offer the oblation  to Tvasthtri, and other celestial who are dear to me.  I am Parameswari, the Goddess of  treasure and knower of Parabrahman. Because I manifested in several forms, the Gods have dispersed me in many places, having many abodes and thus ensured I pervaded everywhere.

Every act of those  who eat  food, who breathe, who hear  and who speak  takes place due to me alone. Non perceiver of me shall perish. Whomever I wish, I make him powerful, I give them knowledge , make them Brahma Rishi, or the one possessing highest wisdom.

I stretch the bow of Rudra to fire the arrow for killing the haters of Brahman. I destroy the enemies of those worshiping me.  I pervade in earth and heaven.

I have generated the father on the summit of sky, and with vertex touch the sky. My Yoni is  deep inside  ocean because of which every living and non living creature has  in them me alone as they breathe. My glory and greatness is beyond earth and heaven.

Satisfied on hearing the sermon, the Kings and Samadhi asked the Maharishi to continue  explaining the ritual of Parayan of Chandi Saptha Sathi, who continued to tell:

The Maharishi said “Recitation of Kavach , Argala and Keelaga are considered mandatory as a part of Saptha Sathi Parayan. The demon King Ravana failed to recite Kavach mantra, hence he was slain by Lord Ram.  Asura Arunasura though earned the  grace of Lord Brahma and Lord Shiva too had to meet death by  forces of Devi because he did not follow the  due procedure while performing Saptha Sathi Parayan. The sacred mantras were taught to him  by Trinity -Argala by Lord Maha Vishnu, Keelaga by Lord Shiva and Kavach by Lord Brahma.

The first part called Prathama Charithra of Devi Saptha Sathi, explains the world of delusion in whose web the entire fleet of Devas and celestial fell and faced misery. In order to come out of it they prayed  Lok  Matha or Goddess Kali, mother of illusory and requested her to destroy  the delusion and illusion which haunted them.  Even Lord  Vishnu fell prey to illusion created by Lok Matha. The most important and powerful sloka chanted  by Lord Brahma to appease Lok Matha,finds prominence in this chapter besides covering  the story of  annihilation of Madhukaidapar.

Chapters 2 to 4  of  Devi Mahatmyam is second part called Madyama Charithra. It deals with the  manifestation of Goddess Mahishasuramardini also called Goddess Mahalakshmi  who emerged from the divine energies of several celestial and annihilation of  asura Mahishasura and his army besides containing hymns which glorifies  the  Goddess.

Chapters five to thirteen (5-13) the third part of Saptha Sathi is called Uttama Charithra. Chapter six deals with slaying of demonic force Tumralosana, the seventh chapter on the slaying of the monster called Chanda-Munda and the eighth Chapter deals with the slaying of asura called Raktabija. The nineth Chapter contains story of the slaying of Asura Nisumba. Chanting  this part in Parayan ensures that the wishes of the seekers get fulfilled.

The twelfth chapter of  Uttama Charithra contains the proclamation of Goddess on the benefits of reciting the Saptha Sathi.The Goddess proclaimed “ I shall alleviate the sufferings of those who  worship me by chanting the slokas in Saptha Sathi. Especially if one read it on the days of  Ashtami, Chaturdashi and Navami, their sins would get washed away.   The moment one finished reading the sacred mantras, their misery would end. I shall permanently reside in those houses where the Parayan of this Saptha Sathi  is done.   Their enemies will run away and their clan and descendants would prosper.  Their homes would be filled with happiness.  Wherever Pooja, Yagya and other ritual takes place , if they also performed Parayan of this sacred mantras, the  benefit expected from them would turn multifold.  The benefit derived would be multifold when parayan of Saptha Sathi is done  compared to the benefits which one may receive through charities such as Go daan, Anna daan, Dhoop  Deepa, and Pushpa daan”

Maharishi continued ” After completing the recital of preliminary mantras, followed by the 13 chapters from Saptha Sathi, the Sadahak should carefully recite slokas from Utharangam, the concluding part which is called Devi Suktham or Vak Amrunia Suktham” .

There are certain guidelines while performing Parayan of Sapth Sathi. One should always recite the entire hymn in Saptha Sathi  in one go without breaking in the middle . If for some reason unable to do, then they should at least  recite the hymns of  Madyama Charithra. In the event the Parayan had to be stopped  midway or required break for some reason, then the recitation should be restarted from the beginning of that chapter which was stopped at mid point.  The pace of recitation should neither be too fast, not too slow  and every word should be pronounced carefully and with devotion.

If for some reason if the Parayan can  not be concluded in a single day, then it could be recited in seven days in the following manner.

Supposing you begin the Parayan on Sunday, then follow the below schedule:

Each one of the Chapters in the Saptha Sathi is under the governance of a principal deity as mentioned  below. 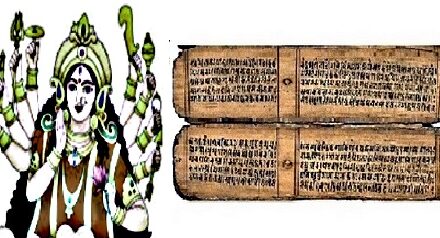 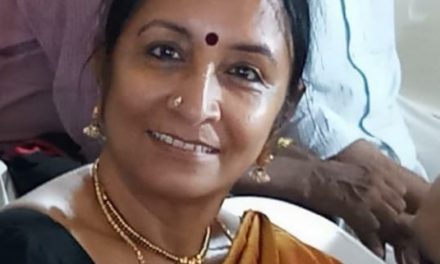