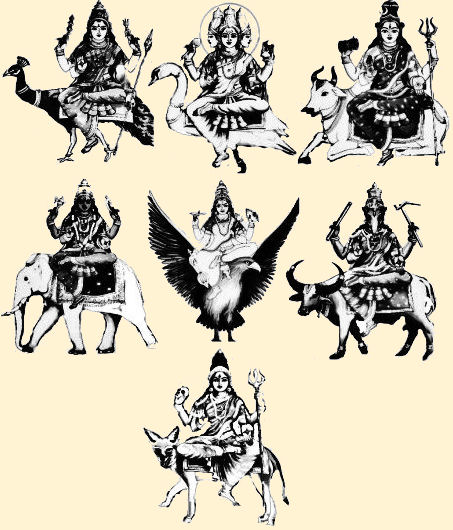 One may have seen a group of seven or eight virgin mothers (deities) either seated or in standing posture in most of the temples. They are known as Saptha or Astha Kannigas or Saptha or Astha Mathrikas. In general only seven are seen in most of the temples.  It is believed that if the devotees worship those seven virgin mothers after praying the prime deity in the temple they will be blessed with all good fortunes in life. Reason being those female deities were created by Lord Siva, Goddess Parvathi and Lord Vishnu on different occasions to assist them in the war they waged against demons and asuras. Some suggest  that they were created by Lord Brahma. There are several lyrics and hymns in praise of those virgin female deities and it is believed that if they are chanted properly, the unknown fear lurking in mind and enemies in life will vanish. Further no ill effects can harm them.

Who are the Saptha Kannigas? Epics like Devi Mahatmiyam, Linga Puran and Vaamana Puran has different stories. While Varaha Purana mention the no of seven female deities as eight, all other Agamas and Puranas mention them to be seven in no and not eight maidens. The Saptha Kannigas are Chamunda, Indrani, Vaishali or Varahi, Vaishnavi, Kaumari, Maheswari and Brahmi. The eighth if included is Yogeswari or Mahalakshmi. Pundits say that according to Khadagamala tradition in Sri Vidya practice, the eight corners of the Chakra i.e four entrance doors and four corners, in all eight directions of Tripura in the Meru Chakra is guarded by the eight Kannigas and therefore the no of Kannigas are actually eight. The eight Kannigas are also part of the sixty four Yoginis worshipped in tantric practices. How did they manifest? The following stories tell their origin and manifestation.

In order to vanquish demon Surapadman, Lord Shiva created seven maiden females from the fire spark of his third eye. Simultaneously six children too manifested from the semen of Lord Shiva in a pond. Goddess Parvathi combined all the six children and created Lord Muruga. The seven maidens (Saptha Kannigas) went to the pond and took care of Lord Muruga. Later Goddess Parvathi converted the seven virgin mothers into Pleiades (seven Stars) and blessed them. She revealed to them that she  converted them as Pleiades to ensure that when Lord Muruga waged war against the demon Surapadman, they would join him to assist him in the battle to vanquish the demon. Thus Parvathi reportedly converted seven virgin female deities into Pleiades .

Another lore tells that as soon as Lord Muruga was created, chief of Indira Log Lord Indira dispatched seven females to kill him. When the virgin mothers went near the child to kill him, their breasts began to lactate milk as though they were his mother. Once their breasts began to lactate, they unknowingly felt attached to the child as if it was their own child. They not only breast fed the child in turns, but also stayed there guarding him till he grew forgetting their mission of killing him. Those seven female deities fought the battle along with Lord Muruga when he waged war against the demons.

The third lore tells different other story. Once sage Kashyaba had two sons called Hiranyaksha and Hiranyakasipu.  Prahalada, was the son of Hiranyakasipu and became a devotee of Lord Vishnu. When Hiranyakasipu opposed him worshiping Lord Vishnu, in the events that followed Hiranyakasipu was killed by the Lord in Narasimma avatar. Soon Baktha Prahalada renounced worldly life and went away when Andakasura, a demon in the clan of Hiranyakasipu took over the reins. Though he was pious initially practicing a long series of austerities and acquired  several boons from the Lords one of which was that every drop of his blood from his body as and when spilled on ground every drop  will become an Asura as strong as he was. Therefore he became invincible and posed terror in the Universe and once went to the extent of even attempting to  kidnap Goddess Parvathi from Kailasa. Therefore Lord Siva decided to annihilate him. In the war that ensued every drop of blood spilled from the body of Andakasura was creating another Asura and Lord Shiva could not vanquish him. Since Andakasura cannot be vanquished as every drop of blood fell on ground was giving him a new lease of life, Lord Shiva created seven ferocious virgin females from the fire sparks of his third eye along with eighth female deity Yogeswari as head to ensure that not a drop of blood from the body of the Asura fell on to the ground during the battle. He also commanded Lord Bhairava to lead all the eight female deities into the battle. Once created, the Saptha Kannigas collected every  drop of blood in mid air before they fell on ground and ensured that not a drop of the blood from the body of the Asura fell on to the ground. As they collected the blood, instantly they drank them. Thus Lord Shiva was able to quickly annihilate the Asura who finally died.

Once the war ended, Lord Shiva asked the Saptha Kannigas and Lord Bhairava to retire back by entering into the Pathal Log. Since Lord Bhairava was incarnation of Lord Shiva himself, he disappeared after merging him into Lord’s body. However the Saptha Kannigas had no place to go and they surrendered to Goddess Parvathi requesting for a place to stay. She promised them that at appropriate time they would get a place to stay permanently in her own abode, but in the meanwhile their services were needed for her incarnation Devi who was fighting the demons Shumbha and Nishumba and sent them there to assist Maha Kali also called Chamunda. This is why the Devi Mahatmaya tells that the Saptha Kannigas were created by male Gods in order to aid the Devi in her battle against the demons Shumbha and Nishumba. After the Saptha Kannigas performed their duties and the time of their incarnation came to an end, they were sent to guard the eight cardinal points of the city Tripura in  Sri Chakra. Thus the Saptha Kannigas in the form of Ashta Kannigas remain seated in the Sri Chakra guarding the eight corners of the entrance.

The Vaamana Purana has its own tale. According to Vaamana Purana once a war erupted between the demi God and Goddesses on one side and a demon called Rathabiksha opposing them on the other side. Rathabiksha brought along with him 28170 chariots and 65610 horses in addition to over one laks foot soldiers to fight the war. Three of the deities Goddess Kaushika, Goddess Kali and Goddess Maheswari became furious and like a ferocious lion when they roared  the sound  was like a huge thunderbolt that instilled fear in the minds of those fighting the war. As they roared few female deities came out from the mouth of Goddess Maheswari. They were three eyed Goddess Brahmmi sitting on the back of a swan, another female deity with three eyes sitting on the back of a Buffalo, Kaumari seated on a Peacock, Vaishali seated on an Eagle, Varahi with half body of a pig as her head seated on a Serpent, Narasimmai and Chamundi. They were said to be the eight Kannigas who fought the war on behalf of the Devas.

The Varaha Purana also tells that the eight Kannigas represented eight mental qualities such as Yogeswari representing desire; Maheswari represents anger. Vaishnavi represents courteousness, Brahmani the pride, Kaumari the illusion, Indrani carping, Chamunda evil tendencies and Varahi represents jealousy. By remaining the controller of those qualities, they actually destroy the bad qualities from the mind and hearts of those who worship them.

One is not sure of the factual position of the Saptha Kannigas though in most of the Sakthi temples one can see a row of seven or in some eight mother deities enshrined in separate sanctum and worshipped. They have been enshrined in those temples to stand guard to the temple deity there. The appearance of the Saptha Kannigas who took part in the battle was altogether in different posture compared to the calm posture seen in the temples where they have been enshrined. The line of the Sapta Kannigas begins with Brahmmi, Maheswari, Kaumari, Vaishnavi,Varahi, Indrani and Chamunda. In some one may also see Yogeswari as eighth deity. Lord Kala Bhairava too appears at the end of the Saptha Mathrikas in some temples.

Plenty of temples dedicated to Saptha Kannigas exist in several parts of the country. Recently I visited one of them in Bangaluru which have an interesting legend behind it. According to a folklore, during the Mahabharata war, once Yudhishtra was passing by the side of this temple site and suddenly his horse lost the vision. Some unknown voice said that if he stayed there and prayed the Saptha Mathas, his horse would regain the sight. Accordingly he stayed there for some time and penanced praying unknown goddess to give back vision to his blind horse. Pleased with his tapas, one day the Saptha Kannigas appeared before him and not only blessed him, but also restored the vision of the horse. Before he departed from there, he constructed a small shrine for them and went away. Several thousand years later someone dug out the idols from the ground below the temple site and constructed a small place of worship. It was a village then. Those who came and prayed the Saptha mathas got their problems solved to their satisfaction. Few hundred years later as more and more people praying there were bestowed with good fortunes, the villagers joined together and raised a regular temple for the worship of the Saptha Mathas.

In Memaruvathoor Adi Parasakthi temple the Saptha Kannigas have separate shrine for worship as they are considered to be on higher divine plane. The Saptha Kannigas are war goddesses and therefore the pundits opine that their pictures are not displayed in the pooja rooms and worshipped as certain strict rituals need to be followed. The sadhanathviks (to attain Siddha powers) however worship them at home. There are hymns for worship of Saptha Kannigas.
Please send your comments to the author on this article 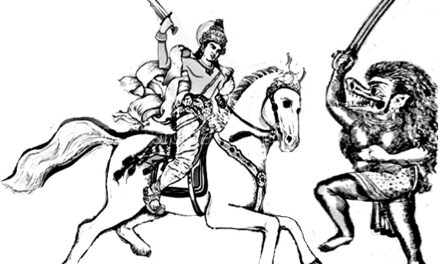 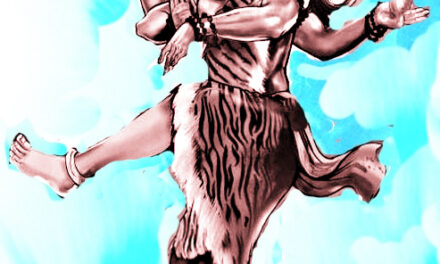