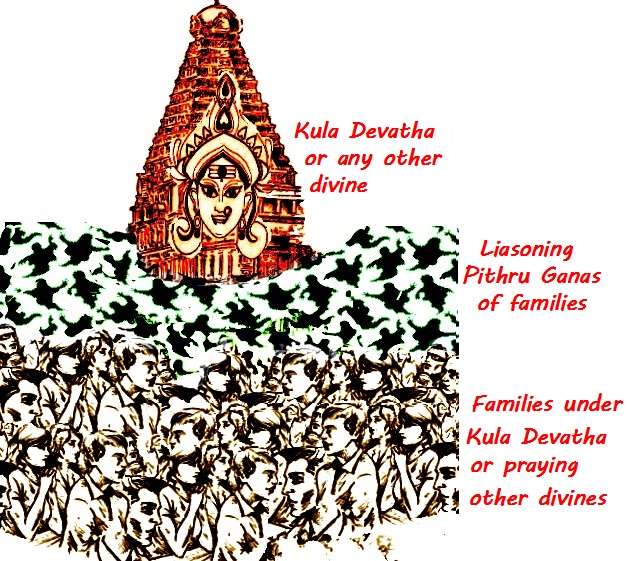 Let us understand the above by the following example.
One group/Kula
No of Generations : 7
Males in each generation:7
Lineages in the family of each male : 13
Total lineages : 13 x 7 = 91

189)Thus total no of families under Kula Devatha or Tutelary/Family deity works out to 91(7×13)+7=98 lineages. Since on an average of not more than 50% of the children are born as male in each generation of families, it is said that maximum 49 (98÷2=49) generations of a family tree (Kula) get protected by Kula Devatha or Tutelary/Family deity because the family tree or Kula  of specific generation expands only through the male members of the family. Once the female members get married automatically they belongs to the other family group. Hence the generation continues through only the male members of the families.
190) Generally, the Brahman rule was that a family do not survive beyond 49 generations because in the lineage chain some member may not have male issues, and some may not have children too. Therefore, if one practically see, at some point of time in 13th generation the continuation of worship of Kula Devatha or Tutelary/Family deity gets disconnected so say the pundits.

——————————
Acknowledgement: I acknowledge with grateful thanks, Dr. V. Sankarkumar, consultant medical officer in USA, who edited my article with valuable inputs before publishing it. He has been writing articles of spiritual nature in both Tamil and in English and has contributed much in one of the Shirdi Saibaba blogger (https://shirdisaibabatamilstories.blogspot.com/-in which I was one of the two coordinators) by translating the English articles into Tamil. …..N.R. Jayaraman (nrj1945@gmail.com).