41. As said earlier, after Parabrahman released the Cosmic and allowed sufficient period of time to make it livable, he released principle divines through whom the other divines, especially Kula Devatha or Tutelary/Family deities needed in the Universe could be released.  Once omnipresent formless Parabrahman began his act, prime divines like Lord Shiva, Lord Vishnu and Lord Brahma emerged from one side of Parabrahman and Goddess Parvathi, Goddess Mahalakshmi and Goddess Saraswathi came out from the other side of his body. However this is disputed by some who claim that only a male deity-Lord Shiva came out from one side of Parabrahman, from whom instantly came out Lord Vishnu from whose nave emerged Lord Brahma. Thus three male deities appeared one after the other from one side of Parabrahman.
42. Simultaneously from the other side of Parabrahman emerged Goddess Parvathi (Sakthi) and from her instantly emerged two more female divines -Maha Lakshmi and Saraswathi. However as per few other folk-lore, once Goddess Parvathi, possessed with the female energies of Parabrahman emerged, she released from her body Goddess Mahalakshmi and she in turn released Goddess Saraswathi.
Three theories float in this aspect. They are:-
(a) The Shaivites say that Lord Shiva is supreme from whom the other two divines emerged. (Ref: Linga Purana, Chapter-3)
(b) The Vaishnavites say that Lord Vishnu appeared first from whom the other two divines emerged. (Ref: Narayana Suktham of Yajur Veda and Narayana Upanishad)
(c) The third view has been that Lord Brahma appeared first from the Cosmic Egg broke by Parabrahman after which the other two divines emerged.
(d) The fourth view –Shaktism- says that matter came first as the Goddess, and from her came the mind, releasing three male forms: Brahma, the priest; Vishnu, the king; Shiva, the ascetic (Ref: Shrimad Devi Bhagavata Purana and Tantric purana texts)
Whatever is said and believed, the basic fact that the three main male divines emerged from Parabrahman were Lord Shiva, Lord Vishnu and Lord Brahma and from them only came Kula Devatha or Tutelary/Family deities much later in stages. 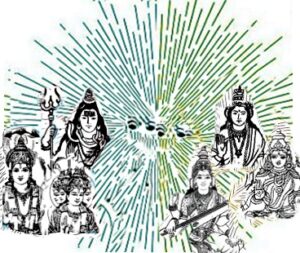 43. Once Parabrahman released the Cosmic, in a wink of an eye, two principle divines –male and a female energies of Parabrahman merged into one to establish Shiva Sakthi and to reveal the concept that Parabrahman was embodiment of combined male and female energy called Parasakthi. The invisible Shiva-Sakthi appeared in the form of a Shiva ling, and in the next flash of moment, Parasakthi in the form of Shiva Ling, split separately to become Lord Shiva and Goddess Parvathi from whom the other divines emerged.
44. Since Lord Vishnu and Lord Brahma came out of the divine rays of Lord Shiva who was from the male energies of Parabrahman, and Goddess Mahalakshmi and Goddess Saraswathi came out of Goddess Parvathi who was from the female energies of Parabrahman, the Shiva Ling not only represented Lord Shiva and Goddess Sakthi, but also revealed that it was embodied with the aspects of other two divines namely Lord Vishnu and Lord Brahma with their consorts who were inside the body of Lord Shiva and Goddess Parvathi. The upper portion of the Linga is like an egg and represents the cosmic egg. Shiva Linga signifies that the creation is effected by the union of Prakriti and Purusha, the male and the female powers of Nature. 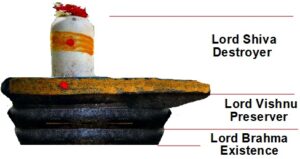 45. Thus, after three male divines and three female divines from Parabrahman emerged, they became partners to each other as Lord Shiva – Goddess Parvathi, Lord Mahavishnu – Goddess Mahalakshmi and Lord Brahma – Goddess Saraswathi.
46. Once the three partners appeared, Lord Brahma was assigned the task of creation, Lord Vishnu the act of protection and Lord Shiva the act of dissolution. Interestingly among the three partners, only two partners namely Lord Shiva and Goddess Parvathi and Lord Vishnu and Goddess Mahalakshmi were authorised to release several divine forces who would at later stage turn into  Kula Devatha or Tutelary/ Family deities to protect the creations to be released by Lord Brahma.
47. Why were only four divines – Lord Shiva, Lord Vishnu, Goddess Parvathi and Goddess Mahalakshmi authorised to release the sub divines- semi, demi divines- which included the Kula Devatha or Tutelary/ Family deities? The acts and tasks of the Prime divines which were Creation, Guarding & guiding and Destruction, are comparable to that of a production unit wherein the goods are manufactured by one group, scrutinized to separate good and rejects which is sent to another group to remold or get them destroyed and the third either to remake material afresh from rejects or destroy them thus keeping the cycle of ongoing manufacturing process moving continuously.
48. Since the students and teachers cannot be the same, Lord Brahma and Goddess Saraswathi as duo creators (Students) were not authorised to release any divines (Teachers) from their body. Therefore, Lord Brahma engaged himself in the task of releasing souls with cycles of birth-death and rebirth and sent them in bulks to different parts of the universe.
49. He perform his act with the knowledge gained from the power of wisdom- goddess of knowledge Goddess Saraswathi.
50. Next task of guiding & protecting the created and scrutinize them for destruction was assigned to Lord Vishnu. Since in the vast land he alone cannot perform the act of guiding & protecting the souls with cycles of birth-death and rebirth continuously released by Lord Brahma, Lord Vishnu needed fleet of assistants to assist him in several ways. Lord Vishnu  perform this act with the support of Goddess Mahalakshmi who was the aspect of fertility, health and longevity.