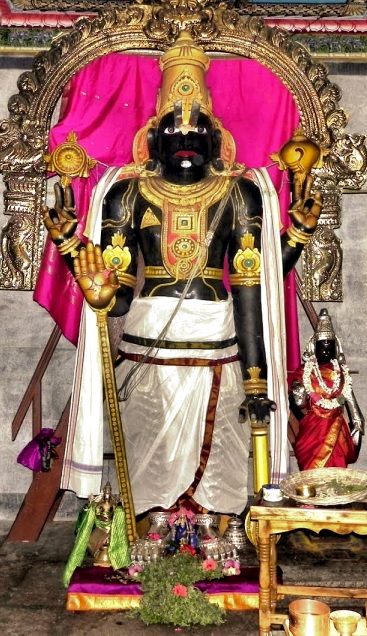 One may not have seen gigantic presiding deity in any temple, fully carved out of a Fig tree, with the roots of tree still wet and the tree not growing. It could only be a divine wonder.  Even in Puri Jagannath temple the statues of the presiding deities are carved out of logs of the wood of special tree after they are cut to size. Contrary to all,  14 feet high statue of presiding deity Lord Vishnu has been carved out of single big Fig tree and enshrined in the Vanmutti Peruman  temple near Mayavaram in a small village called Maappadugai. The village is five KM from Mayavaram on way to Kumbakonam. Nowhere in the world a statue made out of Fig tree appears in any one of the temples except in Vanmutti temple. Vanmutti Peruman refers to the Lord who touches heaven from earth. The uniqueness in this temple is that that the roots of the Fig tree still remain wet and the tree is also not growing. The temple is believed to have been constructed before 2000 years i.e in 12th Century AD by a Chola King named  Kulothunga Chozla-III even though some say that the Fig tree is divine tree from heaven and as old as 5000 years.

The pundit in the temple mentioned that as per legend,  when the temple was constructed thousands of years ago, it was huge one and encompassed with seven courtyards called pragarams, but unfortunately it stands only with one courtyard now, rest may have been destroyed in some events in course of history.

The temple is small but awesome appearance of the Lord will compel one to stay there to have his darshan for hours. The image of the Lord is in dark green colour and the Lord  has holy conch, chakra,  mace in his three hands while the fourth hand shows Abaya mudran. The deity has been painted with special herbal colour to prevent decaying and the rest of the temple has been painted in Ajanta art style.

Another uniqueness in this temple is the Hanuman statute enshrined. The idol is about four feet high and like the statues of many temples in Karnataka, the tail end of Lord Hanuman has a bell and tail stretched up to the head. It is said that slight tapping of any part of the holy body of Lord Hanuman will give a unique musical note. Lord Hanuman here when worshipped removes the evil sins accrued in many births.

What is the legend associated with this temple?

Thousands of years ago one of the Kings in the then Kodagu nadu was afflicted with a severe skin disease which caused unbearable irritation. The disease was borne out of several heinous sins (It is called hathi or dosha in Sanskrit) committed by him in his past life. Inspite of best treatment from the doctors, his diseased did not get cured. Therefore as per the advice of his court pundits, he began to visit temples across  Kodagu nadu seeking divine favor to get rid of the disease. On way an unknown voice told him to travel by the side of Cauvery river where a solution to his problem would be found.

The King began to travel by the side of river Cauvery as heard from the unknown voice which had further directed him to go to Moovalur temple  and worship Lord Shiva who has manifested in the form Lord Maarga Sahayeswarar there. The King would get further  guidance in that temple. Lord Maarga Sahayeswarar temple is in present Mayavaram town. When the King reached Maarga Sahayeswarar temple and prayed Lord Shiva, he manifested before him in invisible form and asked him to go to Kodihaththi Vimochanapuram (the place where a crore dosha of different kinds will be washed away), a small village nearby where he would have the darshan of Lord Vishnu and simultaneously get rid of his skin disease.

The King continued the journey as directed by the voice and when he reached Kozhikuththi and rested for a while, Lord Vishnu  in the form of a big Fig tree appeared and gave Visvaroopa darshan to the King. The Lord was carrying discus, conch and mace with Goddess Mahalakshmi seated on his chest. The four leaves of the Fig tree became the four hands of the Lord and another set of leaves turned into an umbrella with the root of the tree being the feet of  Lord. Instantly entire sins of the King vanished and from then on, the place came to be called as Kodhi Hatti meaning  sacred place where the devotee will be freed of one crore doshas of many kinds accrued out of committing several sins in the past life. As time passed, the name Kodihaththi came to be mis spelled as Kozhikuththi. Subsequently the same King had turned into a sage called Pippala Maharishi and composed a hymn for getting relief from Sani dosha.

As per another legend the Chola King met Sage Pippalar when he was in Lord Maarga Sahayeswarar temple and fell at the feet of the sage and sought his advice for relief from the disease. Sage Pippalar reportedly taught him a sacred mantra which the King should chant daily and worship Lord Vanamutti Peruman after taking dip in the Pushkarni for forty eight (48) days to get cured of from the skin disease. The King scrupulously followed the advice of the sage and at the end of the penance, he had the darshan of Peruman and got relieved from skin disease.

Thus the temple has become a temple where if one prays for the cure of skin diseases, they get relief. It is stated that by worshiping at Kozhikuththi Vanmutti Peruman temple, the devotee will get triple benefit of the having had the darshan of Lord Venkateswara of Tirupathi, Lord Adi Varadaraja temple in Kancheepuram and Lord Yoga Narasimha of Sholingar temple as the Vanamutti Peruman here is the same Lord and brought with him the divine powers and energies which he had enjoined when he manifested in those places in those forms.

Some inscriptions are also found inside the temple. One of the inscriptions indicate that in order to get rid of Sani Dosha the devotee will have to offer food (Annathan) to ten (10) brahmins continuously for fifty one (51) Saturdays.

Few snaps from the temple 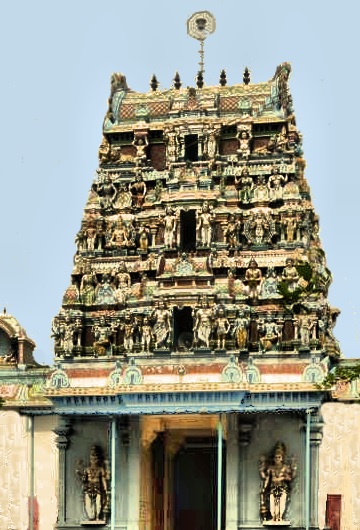 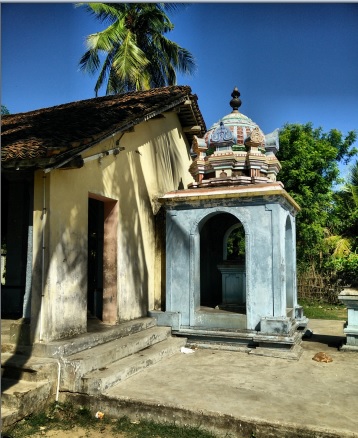 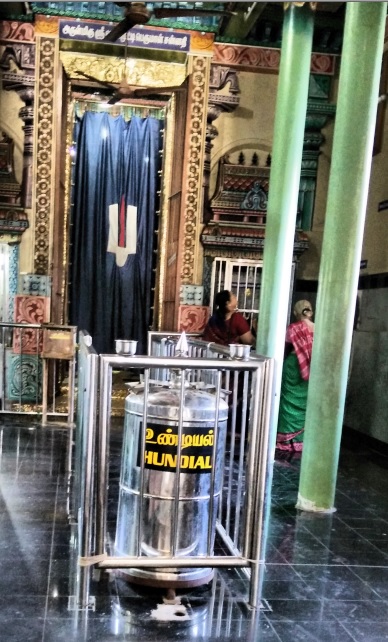 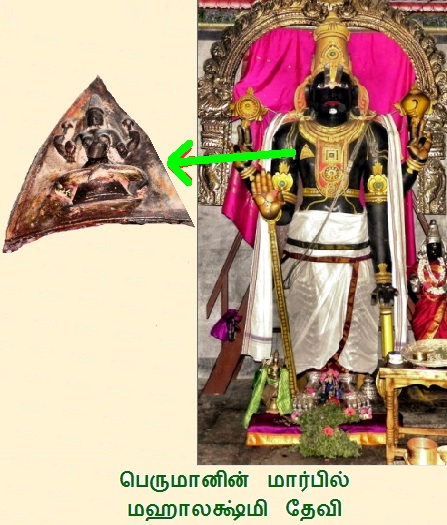 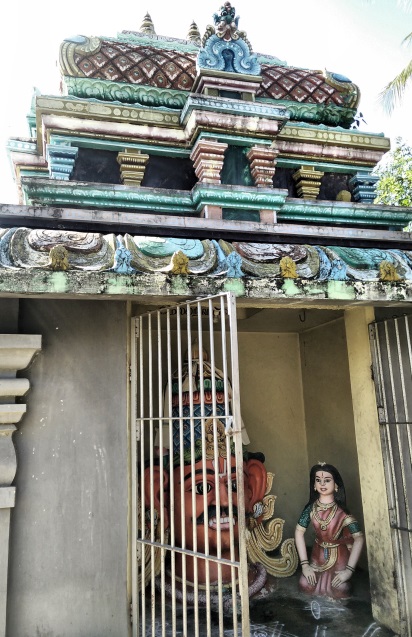 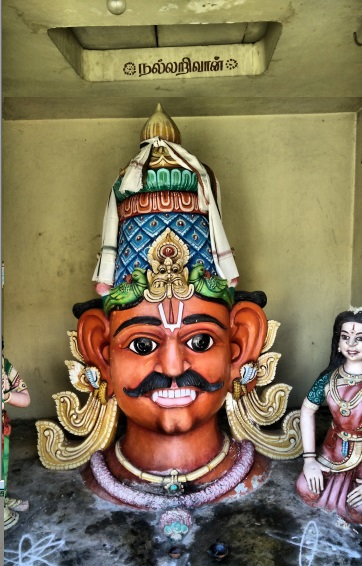 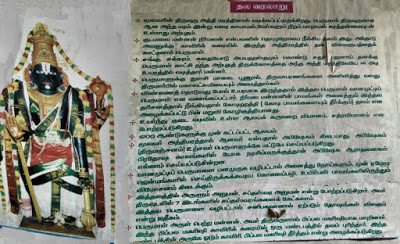